~ Pilot Project under NSQF is a MHRD sanctioned project launched on 3rd September 2012, and driven by Govt. of Haryana (GoH)’s Directorate of Secondary Education

~ NSQF Haryana mainstreams Vocational Education in Govt. school students as per industry standards and prepare them for the World of Work.”

15th July 2014, Gurgaon: Haryana State Govt’s Education Department along with its NSQF Program Management & Knowledge Partner, Wadhwani Foundation (WF), today jointly announced the fresh placement of over 134 students as part of the ongoing Pilot Project under NSQF launched under the aegis of the Ministry of Human Resource Development, Govt of India. National Skill Development Corporation (NSDC) and trade specific sector skill councils played a key role along with Directorate of Secondary Education, Haryana and Wadhwani Foundation in the process of placement.

Haryana is committed to provide value education, quality teaching and research to the aspirant learners of the state. Haryana owing the responsibility of the holistic growth of the pupil coming in to its fold is committed to 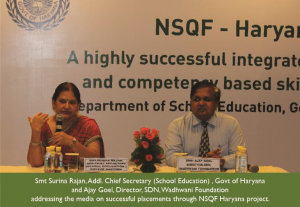 make all possible efforts to help in realizing his or her dreams as well as the society to which he or she hails from. Keeping this in view the state is pioneering the thrust on developing employability in students and was the first state to pilot the National Skills Qualifications Framework (NSQF)* in 40 schools across 8 districts reaching over 4,800 students. Targeted at Secondary and Senior Secondary Schools, The Pilot Project under NSQF was launched on 3rd September 2012, in Haryana. NSQF focuses on teaching outcome based employment- oriented courses to students of classes IX to XII as an integral part of their curriculum, in specific industries like Retail, IT, Security and Automobile . The curriculum of each Job Role is divided in 4 levels (Level-1 to Level-4), in alignment with NSQF. The students also undergo training in functional English to help them deal with day to day interactions at the work place.

Elated at the highly successful placement of students under NSQF Haryana, Smt. Surina Rajan, Additional Chief Secretary (School Education) said, “The only way of expanding skill training is to foray in mainstream education.

NSQF has opened window of opportunities for secondary school students in Haryana. The program benefits students at grassroots level and improves their future and its success is firmly established by the success of the graduating students getting employment in organized sector. I must thank the tireless and selfless efforts of the entire State Team for driving this effort along with NSDC, SSC and our Program Management & Knowledge Partner, Wadhwani Foundation, without whose support it would have been difficult to show commendable results in such quick time. I also thank our industry partners who have shown exemplary commitment and vision in undertaking such path-breaking recruitment.”

The Pilot 40 School which was started in 2012 has now blossomed and 1673 students have appeared for Level 4 post class 12. The success of the pilot now can be gauged that the industries are willing to do school campus placements drive to recruit these students. 3 trades school campus placements in few districts have already completed, more placements are being lined up in the coming days and the State is aiming to achieve complete success in this ambitious drive by getting all the interested students placed. The entire drive is slated to be over by end of July.

Congratulating the Haryana Govt and its state Education Department on launching and sustaining this visionary program, Ajay Goel, Director, Skill Development Network, Wadhwani Foundation said, “NSQF program works towards strengthening the collaborative role of industry and academia as integral to meet the objective of providing industry employable youth. At Wadhwani Foundation, job creation is our primary goal and the successful placement of over 350 students till now (and many more to happen) is a wonderful indicator of the program success and I thank the State Education Department, Haryana for its untiring efforts and persistent support of State Additional Chief Secretary (School Education), Smt. Surina Rajan who has provided visionary leadership to NSQF program and Shri Vivek Atre, Director Secondary Education for driving the project along with his dedicated and committed team. The key role played by schools, teachers and the students in creating a strong platform for NSQF should be acknowledged too. While Wadhwani Foundation provided program management support for NSQF implementation, the passion and zest of the enrolled students and their teachers has gone a long way in the great success of this programme and the placements which followed.”

NSQF Haryana has proved to be as greatly successful PPP program that has grown by leaps and bounds in a short period. It has expanded from 8 to 21 districts, from 4 to 7 sector-specific skill courses and 40 to 240 schools catering to over 25,000 students. Seen as a best practice, many State Governments have started implementation or are in planning stage for introducing and mainstreaming vocational education in secondary schools. State along with Wadhwani Foundation has created the Standard Operational Procedure Manual based on its experience in this project. The Manual contains a detailed mapping of activities involved; various tools used and developed processes, documents and key orders/notices of DSE, protocols created and processes set up. This can be used and adapted by the respective States to implement a similar project in their schools.

The companies who came in for recruitments were pleasantly surprised to see quality and committed candidates. “There is a drastic difference between the students we come across while recruiting elsewhere and the ones who sit for placements post exposure to skill development modules of the NSQF initiative. These students are extremely hard working and readily employable. We, in fact, get to save up on the 30 days we normally take to train new recruits and that works well for employers like us” said Neeraj Sharma, HR Manager, Big Bazaar Retail.

NSQF Haryana has proved that an enabling environment to students for preparing them for academic, educational, technical, social, recreational, and workplace readiness can be game changer. Viewing the importance of the Skilled manpower as a need of hour the State Government moved a ahead and facilitated to implement the STAR Scheme of Ministry of Finance, GoI by providing the existing infrastructure by way of Lab, Faculty, etc to extend the benefit of the scheme to school dropouts, pass outs and other existing schools students.

Founded in 2003 by Dr. Romesh Wadhwani, the Foundation’s primary mission is economic acceleration of emerging economies. The Foundation embarked upon its mission in India first, and subsequently, the Foundation has expanded into the U.S and other countries. In India, with an expected growth of 250-300 million people joining the workforce by 2022, large scale job creation became the primary imperative for the country. Also, as India’s population grows young, most advanced nations of the world are growing old, offering India an opportunity to become the global talent supplier. Catalyzing job creation and skill development become the two primary target areas of focus for the Foundation. During the last decade, Wadhwani Foundation has launched five niche, high impact Initiatives in India. These include promoting entrepreneurial and employment skills, tapping the educated disabled, encouraging innovation and driving policy changes to jump-start economic opportunities. To address persistently high youth and displaced- worker unemployment in the U.S, Wadhwani Foundation launched the Race to a Job’ initiative in 2012.

Launched in 2011 by The Wadhwani Foundation, Skill Development Network (SDN) aims to revolutionize skill development by leveraging technology to create millions of skilled manpower. Over the next decade, SDN aims to skill 5 million youth, create 50 high demand job based programs and work closely with over 50,000 teachers. Currently, there are millions of jobs that are not filled and huge resources are spent due to fresh graduates not being job ready. To bridge the massive skill gap, SDN has launched ‘Race to A Job’ program which embraces technology as an enabler to jobs-driven and learner-centric training, both in India and the U.S.