Chicken and egg: Only nations that focus on human development fast track their economic growth

There is ample research to show that the two are linked. But different nations have debated their way to differing priorities. Many nations have argued that it is necessary to raise economic resources through growth in order to fund human development. But across nations, those that have done this have become victims of low growth. In a malicious self-sustaining cycle, the unskilled labour has pushed them further into a hapless downward spiral. The reverse appears to work better. Nations that focus on human development fast track their economic growth. 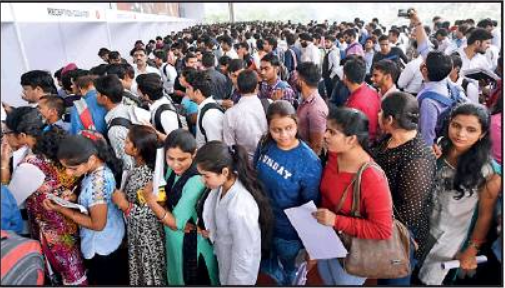 By examining the priorities that India has, we can predict the future. Budget 2017-18 reveals the trend. The government had allocated Rs 79,686 crore for education. As a percentage of the total budget, it doesn’t look particularly healthy. In 1999, India spent 4.4% of GDP on education. This has slowly shrunk to between 3.5 and 4.0% across the last decade. Last year, the figure was 3.7%. Compare this to other countries such as Brazil which have improved spends from 3.9% in 2005 to 5.3% in 2013, China that has gone from 2.8% in 2005 to 4.3% in 2013. It is evident that India is falling behind other nations. It may not have the skilled workforce required to fuel economic growth.

There is a need to address the issues around skilling with great urgency. Several initiatives have been launched. One of them is the National Policy for Skill Development and Entrepreneurship 2015, a framework for skilling India at scale and with speed without sacrificing standards and ensuring the initiative remains a sustainable endeavour. The policy is linked to demand centres, is aligned with existing educational infrastructure, focussed on building qualified trainers, and developing innovations in the skill development space.

The real need is to bring the service sector (financial services, transportation, hospitality, tourism, education, facilities management, real estate etc) under the lens of human development. Services have become the growth propellant of the nation, drawing foreign investments, contributing to exports and providing employment on a significant scale. The sector is responsible for 55.65% of India’s Gross Value Added and employed 28.6% of the population. Net service exports stood at $18.7 billion in Q1 2018-19.

Despite the growth in services, here is the paradox: Employers can’t fill in positions due to the lack of the right skills.

The number of young people entering the labour market is on the increase; 60% of India’s population is already in the working age group. According to the National Higher Education Commission, the average age of the population by 2020 will be 29 years (against 40 for the US, 46 for Europe and 47 for Japan). But industries are unable to find appropriately skilled manpower. Something is going wrong, otherwise 48% of Indian employers would not be worried that there is a talent shortage.

That is why industry leaders are exploring new models to find and employ talent. Amongst these are part-timers, retainers, project-based contracts and hourly-wages. According to PeopleStrong, India will see 18-20% of its workforce in project-based jobs. These are signals for a human development strategy that needs to arrest this slide .

The developments suggest that India must turn around its human development story. There is a desperate need for a pool of skilled talent to take advantage of the services opportunity. In addition, India can export its skilled workforce to meet the needs in other parts of the world that are also headed for a skills deficit. The clock is ticking. Any delay will result in missing the boat.

The writer is Executive Vice President at Wadhwani Foundation 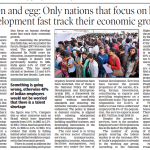