Loyalty, commitment to work and the willingness to take responsibility are the qualities that makes former defence personnel perfectly fit for many jobs. Startups, more associated with those just out of college, are no exception.

The jobs they fit into best are said to be logistics, human resources, management and administration, and security. With over 30,000 such personnel employed in Bengaluru alone, they are slowly gaining on the job front.

According to a senior IAF officer who has served for nearly 20 years, “Ex-servicemen who amalgamate into the work environment do so at all levels across all kinds of industries.” They are mostly capable of travelling to hostile environments without complaining, he added.

For Prashant Rai, a retired major, who owns three firms, ex-servicemen are the backbone of his business.

Prashant owns Balram, a security firm, OTJ247, which he calls a man Friday for the city and Fire Prevention System which, as the name suggests, deals with fire safety and other such issues. It also does fire audit and maintenance.

Rai who employs over 80 people said that the quality that makes them suitable for a job is that if they are given a task, they will complete it.

Speaking about OTJ247, he said, ‘We Are Your Man Friday’. It was rebranded and made a one-stop-shop for tasks like plumbing and carpentry among others. OTJ247 is now in five cities, Mumbai, Pune, Delhi, Gurgaon and Bengaluru.

Consultants too are in agreement with him. T J A Alexander of executive search consultancy, TJA Networks, said, “Ex-servicemen make excellent employees. Many of their qualities like discipline, loyalty and commitment come naturally to them, which is of great help to any organisation.”

Vishwavijay Singh, who co-founded Salebhai Internet Pvt Ltd, an e-commerce firm that raised Rs 10 crore from Brand Capital, has about a quarter of his employees who are ex-servicemen or family members of people in the Army. “In terms of commitment, they are second to none and the attrition rate among them is almost nil,” Singh added.

The firm allows for work-from-home. Consequently, the work that can be done remotely is looked after by the wives of armymen when they are transferred, he explains.

“Ex-servicemen, most of whom are in the age group of 35-45, represent enormous potential. Every year 60,000 soldiers retire with little option but to be pigeon-holed into informal security jobs,”said Ajay Kela, President and CEO, Wadhwani Foundation.

However, startups like Ola and Uber have taken the lead in realising the virtues of rigorous discipline, work ethics and tremendous service orientation that a soldier brings to the table. Both Ola and Uber have enrolled ex-servicemen as entrepreneur drivers, he adds.

Meanwhile, Wadhwani Foundation’s Skills Development Network and Ministry of Defence have signed a Memorandum of Under standing for training and employment of 300,000 ex-servicemen by 2020. 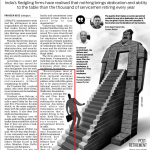