Employees as Partners, in Crisis

Crisis is a great leveller, a strict teacher, a consistent normalizer and it is also a great drama when it comes to behaviours that manifest in a variety of ways.

What roles do employees play in a crisis? How do they relate to each other or leaders relate to employees, in a crisis? What happens to the demands on tasks and emotions that characterize the daily lives of the workforce and the organisation? Does a threat perception change their roles?

Existential threat churns the subconscious of organisations in strange ways. As I study responses of MSMEs, as they become anxious due to their being aware of the impending demise, it occurs to me that MSMEs oscillate between befriending or fighting with other stakeholders to stay alive. Their response is spontaneous, polarized, inconsistent and often situational. Often, these responses are automatic and not deliberately thought through.

Crisis is a great leveller, a strict teacher, a consistent normalizer and it is also a great drama when it comes to behaviours that manifest in a variety of ways.

Emerging Insights from the Changing Roles of Employees 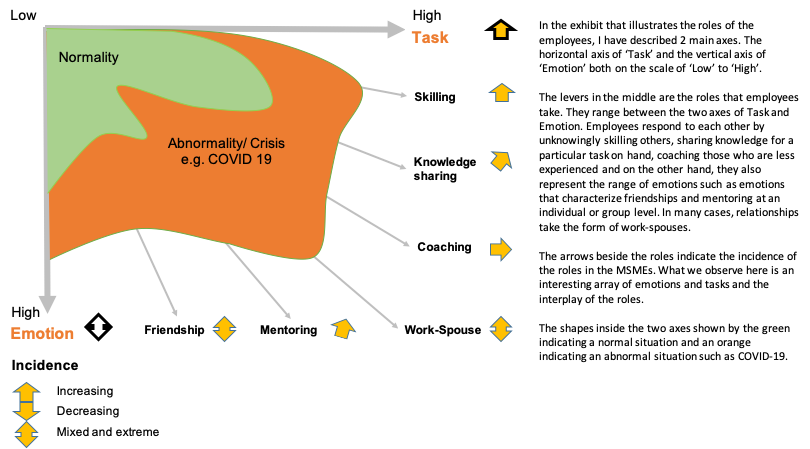 A. Demand for roles spikes during crisis

Observe the green shape in the exhibit in normal situation and observe the orange one. In crisis, demands and expectations from employees shoot up. Unfortunately, in a significant number of cases, they are unreasonable and, surprisingly in some cases, unfair!

Entrepreneurs deal with time traps (tomorrow, they could be dead!) and capability traps (always knew their enterprises fell short of certain capabilities to compete effectively but now the realization bites and could be a death knell if not corrected), their instincts demand faster turnaround times, quicker responses from their employees, with fewer mistakes and flawless execution. The victim in most of these cases is incorrect and misaligned assessment of the performance, disgruntled employees, talent churn or messed up work life balance.

In adapting and coping, organisations which (un)learn faster and together, and leaders and employees that are able to keep pace with the changing paradigms, the demand for roles may result in positive outcomes such as skilling, knowledge sharing and coaching.

B. Skilling, knowledge sharing and coaching

I observe that in pivoting MSMEs, employees are quick to not only upskill themselves but also help others to build their skills. It is hard but it is observed, nevertheless. The need for skilling goes up substantially and employees skill each other by working collaboratively. E.g., I have seen employees from operation teams pick up skills of designing products and employees in product development teams become sales officials. Finance and technology employees become strategists and help the operations. Together, they demonstrate the ability to share knowledge and even coach each other. As coaching is more specialized in nature, I have found the incidence lower than skilling and knowledge sharing. Collectively, they deliver the goods in performing not only their primary tasks and roles but also the added and unusual roles due to the situational demands.

Entrepreneurs, leaders and employees could look at each other for support. Employees also could look at each other as competitors as they fight for the thinning resources that their leaders can provide them with. Lonely leaders and employees with misaligned intentions and competing commitments make a heady cocktail for an emotional stretch, wear and tear. In situations wherein they empathize with each other, they share their stories of victories and defeats at workplaces, anger, anxiety, frustrations, ruminations, criticisms, sadness and seek to support each other emotionally, they form emotional bonds never seen in normal situations.

With Work from Home (WFH) and travel restrictions during the Covid times, tempers and frustrations could catapult quickly and any work colleague who becomes an object that fills the need for managing the range of emotions, could develop a strong emotional bond among each other. Ranging from deep friendships to fierce animosity, employees play roles of true friends (or enemies). As demands for the tasks they do grow, they often stretch themselves physically and mentally and the emotional bonds show extremities in their labour.

I have also noticed fake emotional responses when employees want to appear collaborative, although being combative or aggressive. This happens as the employees suppress their natural and real behaviours.

In many situations, relationships take the form of work-spouses where two leaders and/or employees forge a deep bond, almost as in the case of real-life spouses, and find comfort in each other’s emotional spheres and company. It is interesting to note that this is prevalent, albeit in different proportions, in many organisations and even in the case of remote working.

MSMEs and their leaders would do better should they observe these roles carefully and think about the ways in which they could see their employees’ roles differently and use these insights for managing them better. After all, a crisis needs good partners and employees are your partners.