Skilling, of late, has become a hot-button topic across the world. And given India’s demographic dividend, it acquires special significance. With 54% of our population below 25 years of age, we are sitting on a massive workforce.

Unfortunately, many of them are unemployable with their skills not matching the emerging industry requirements.

Traditional education has failed to equip them for the world of tomorrow. The numbers associated with this problem are daunting—by 2020, almost 60% of India’s population of over 1.3 billion will be in the working age group of 15-59 years. Of these, barely 2% to 3% are expected to have usable skills. That eventuality is only five years away!

There are two ways to look at this—as a massive wave of unemployment that will leave India floundering or as an unprecedented resource for wealth creation that will outpace much of the world, if equipped with the right skills.

India is responding to the challenge. The country has recognised the fact that skilling is an urgent need. Further, it has begun to put in place the infrastructure, processes, standards and systems required to raise large skilling factories where youth can be trained for a number of trades and professions that help them contribute to GDP.

The government is now giving momentum to the response by putting in place policies and support systems to turn skilling into a base industry that drives others such as auto & auto components, construction, textiles, health & wellness, gems & jewellery, logistics, security, telecom and textiles (see graph). 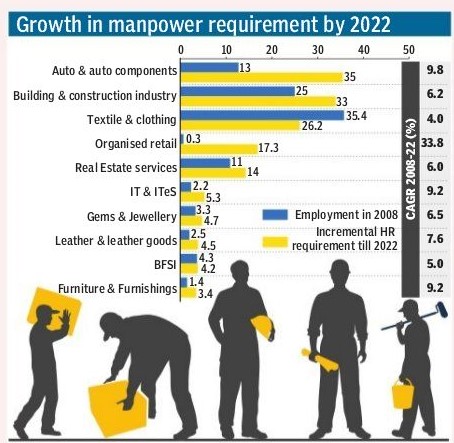 Growth in manpower requirement by 2022

In all, the Pradhan Mantri Kaushal Vikas Yojana (PMKVY) that the Cabinet approved in March 2015, has identified 24 emerging sectors for immediate attention. This scheme is being coordinated by the recently shaped ministry of skill development and entrepreneurship (MSDE).

The PMKVY aims to train 24 lakh people, including 10 lakh who will be certified in recognition of prior learning.

Institutional arrangements comprising of the National Skill Development Corporation (NSDC), Sector Skill Councils (SSCs), private assessing agencies and training partners for each identified industry are already in place. The PMKVY is demand-driven—or, in other words, it closely addresses the skills gap. It is backed by a budget of R1,500 crore (for skilling 24 lakh youth).

The PMKVY has commendable intent. In addition to its goal of creating employable youth, its strategy is aligned with several other national programmes such as Swachh Bharat, Make-in-India, Digital India and National Solar Mission.

Aside from skills required for recognised industries such as banking, tourism, construction, real estate, textiles, etc, the overall effort to skill India also takes into consideration the need for skill development in trades and occupations such as carpentry, masonry, nursing, etc, as there is a dire shortage of these skills.

There is also a national push towards promoting craftsmen. The Directorate General of Training, holds an annual competition in association with the CII for craftsmen such as electrician, fitter, industrial electronics, miller, tool & die maker, turner & welder, cutter & tailor.

In other words, the approach is well-balanced and addresses the overall needs of industry and society. To accelerate this process, the government has set up the National Skill Certification and Monetary Reward Scheme. The idea behind the scheme is to ensure that those with usable skills are certified. It provides an incentive of approximately R10,000 to each candidate in the manufacturing, services and other sectors who undergo training and certification at an authorised centre (the incentive value varies based on levels). In fact, an amount of Rs 1,000 crore has been set aside for this by the government—aiming to ensure that 10 lakh individuals go through a certification process with standardisation as the objective.

What remains to be seen is if the skills being imparted are of standards that can also meet global requirements in developed countries such as Germany, Japan and the US.

Although tremendous progress is being made in skill enhancement across the board, the numbers being addressed are in few hundred thousands. The real numbers that need to be addressed are in millions—to be specific, the vision of the National Skill Development Initiative is to skill 500 million by 2022. If those numbers are to be met, there is an urgent need to scale infrastructure and support. The private sector has shown considerable initiative to give India’s skilling initiative a boost. Philanthropic and not-for-profit organisations have also joined hands with the government to give skilling the required impetus.

Much work needs to be done. But, more importantly, a strong and determined start has been made. 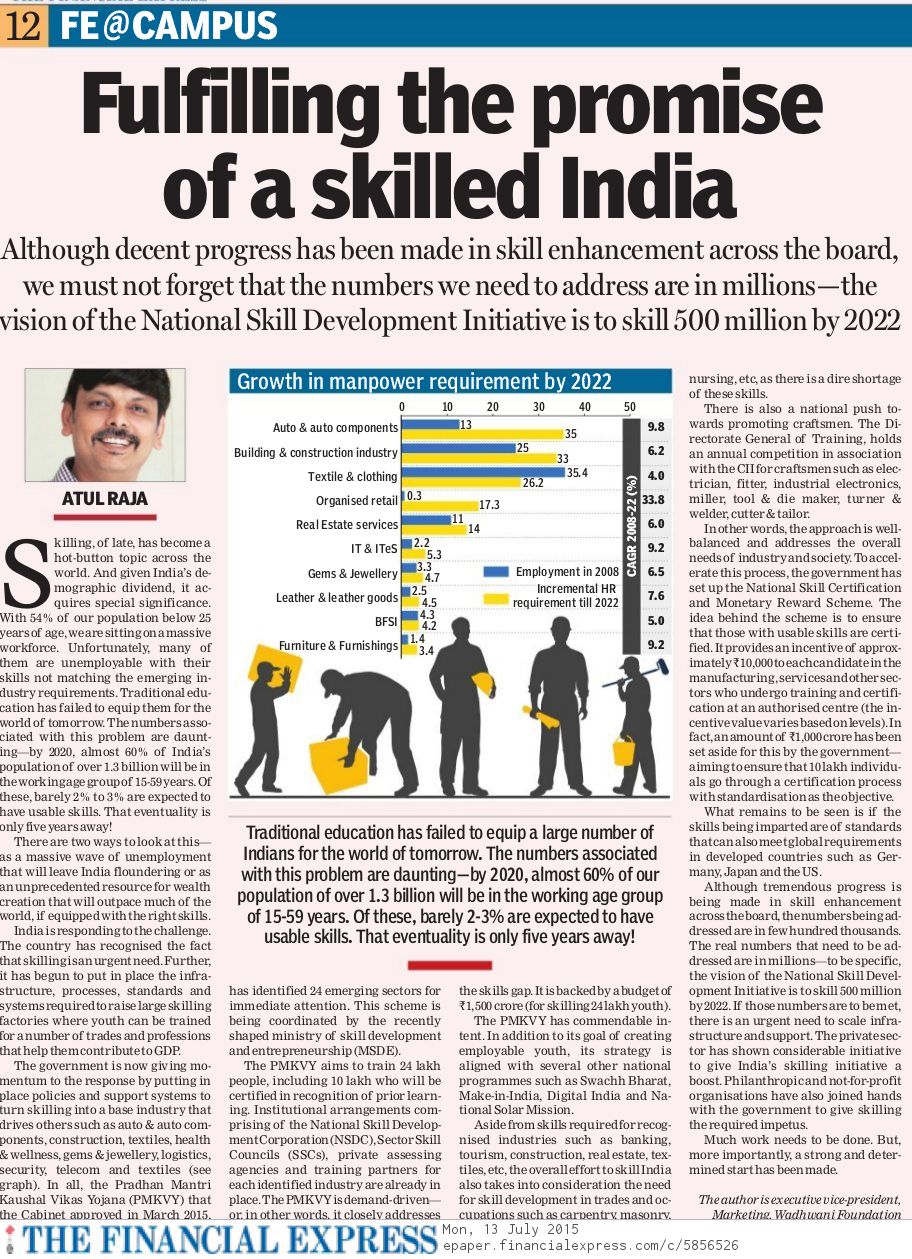