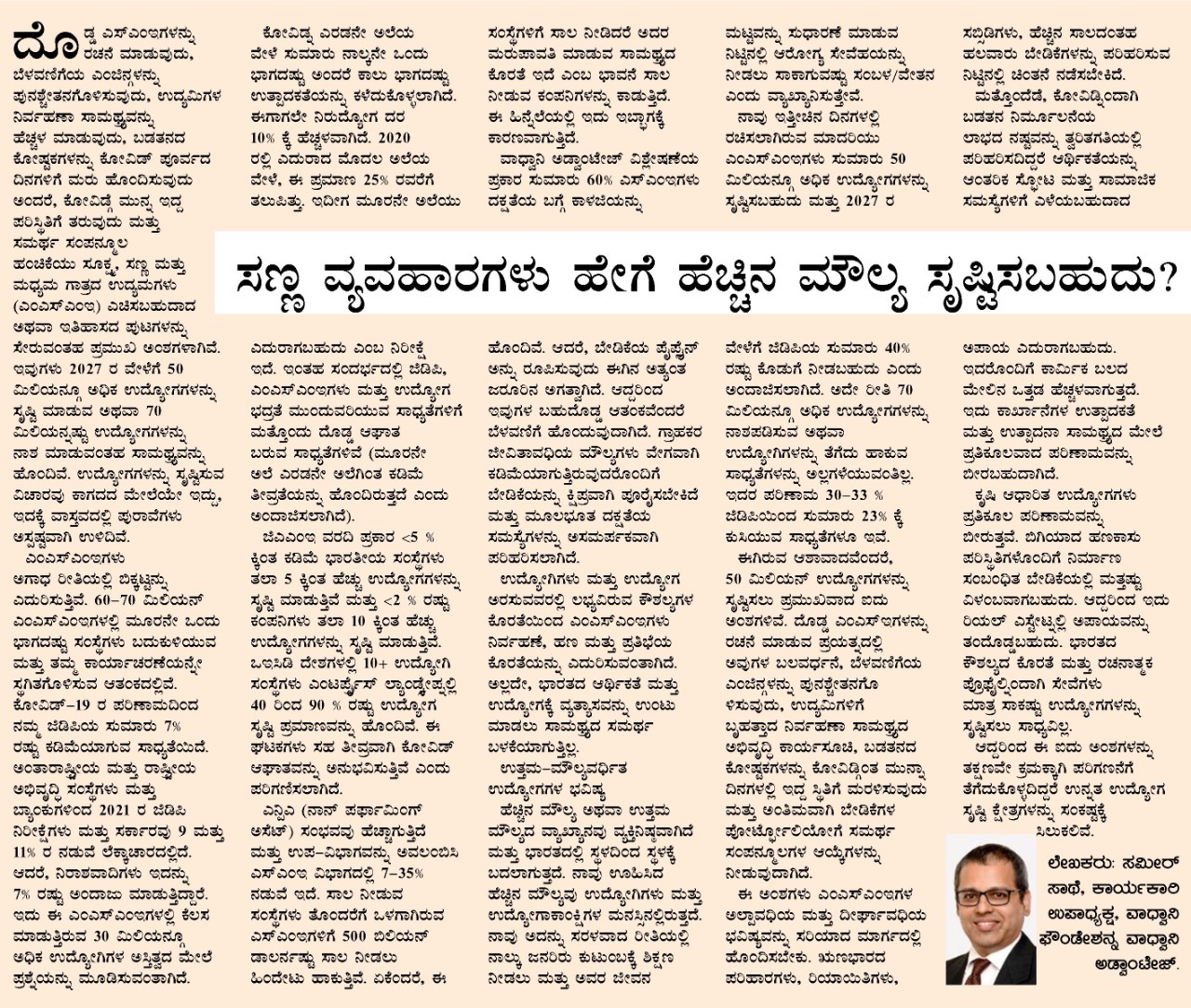 Micro, small and medium enterprises (MSMEs) can create or be history. They have the potential to create 50 million additional jobs or destroy up to 70 million jobs by 2027 to the current 115 million that they employ. While their role in creating jobs on paper remains largely uncontested, its proof, in reality, remains elusive.

MSMEs face an existential crisis. Close to one-third of the 60-70 million MSMEs face survival anxiety and a threat of being wiped out. This will render about 7 per cent of our GDP under threat given the impact of Covid-19. The GDP projections for 2021 by international and national development organisations and banks, and government hover between 9 and 11 per cent, and the pessimists put it at 7 per cent. This would put to question the employment of 30 million people working in these MSMEs.

The second wave of Covid that saw almost a quarter being lost in productivity has already increased the unemployment rate close to 10 per cent. In 2020, in the first wave, it rose to over 25 per cent at its peak. With expected mutants of the virus, experts predict a third wave during September-October 2021, which could result in another jolt (though less severe than the second wave), to GDP, the survival chances of MSMEs and employment.

GAME’s report states that <5 per cent of India’s firms create more than five jobs each and <2 per cent create 10-plus jobs while, in comparison, among OECD nations, 10-plus employee firms make up 40 to 95 per cent of the enterprise landscape. The trauma of Covid is felt severely by these units.

NPA (non-performing asset) incidence is rising and oscillates between 7-35 per cent in the SME segment depending on the sub-segment. The lending community is shy of bridging the $500 billion deficit troubling the SME community due to the lack of confidence in their ability to pay back the monies lent to them, leading to a dichotomy.

Wadhwani Advantage analysis shows that around 60 per cent of the SMEs have concerns on efficiency, but the severest need is to build a demand pipeline, and therefore, their biggest concern is growth. The demand is lukewarm with lifetime values of customers eroding fast, and basic efficiency issues addressed inadequately.

With the deficit in available skill sets of the employed and the seekers, the MSMEs are a management, money and talent deficit community, and yet, carrying an untapped potential to make a difference to India’s economy and employment.

The future of high-value jobs

The definition of high value is subjective and varies widely from location to location in India. The perceived high value lies in the minds of the employees and job seekers. We define it simply as salaries/wages sufficient to support a family of four in educating them and giving them adequate healthcare to increase their standard of living.

Optimistically, there are five variables that are vital to generating 50 million jobs. Consolidation in a conscious attempt to create larger SMEs, revving up growth engines, massive management capability development agenda for entrepreneurs, resetting poverty tables back to pre-Covid days and, finally, the efficient resource allocation choices to a portfolio of demands.

These variables should set the short- and long-term future of MSMEs on the right path. Several demands of debt relief, concessions, subsidies, more money lending are good but not good enough.

Pessimistically, the loss of poverty alleviation gains due to Covid, if not addressed quickly, could drag the economy to internal implosion and societal issues of skewness, putting pressure on labour force, which in turn would adversely impact the productivity of the factories and manufacturing output.

Farm jobs will be adversely affected anyway. With tight money conditions, there could be further delay in construction-related demand and, therefore, it puts to risk employment in real estate. Services alone cannot create adequate jobs due to the skilling deficit and structural profile of India. Therefore, the top job-creating segments are likely to be jolted if these five variables are not taken into consideration for action immediately.