Is coronavirus guiding us towards business innovations?

From being in a state of shock and awe to collaborating and supporting each other, businesses are currently responding in several ways to the trauma caused by the coronavirus crisis.

COVID-19 is turning out to be the world’s largest unplanned experiment ever done. While it is making businesses anxious and traumatised, it is also guiding them to innovate. I have lensed it based on the underlying psychology of the businesses and their severe need to survive.

According to Wadhwani Advantage, the COVID-19 induced global loss is valued at anywhere between $3 trillion and $10 trillion. The funding as an emergency response to COVID-19 is pegged at $25 billion, and trillions of dollars are being planned as debt (which may have its own long-term burden and consequences) by several countries. The need for grant funding is close to $500 billion and we are nowhere close to it.

We estimate that the visibly announced funding for pure business innovation is much less at <$ 10 billion. The businesses are currently responding in several ways to the trauma that has caused the existential crisis. I have categorised them into the frames that psychologists have introduced us to, already.

Fright/ Freeze/ Flight response (Cannon, 1929; Lang, 1994 and Barlow, 2002) and ‘Tend and Befriend’ response (Talyor, Shelly, Behavioral Bases of Affiliations Under Stress, 2006) to the traumas that the subjects suffer. See Exhibit 1. 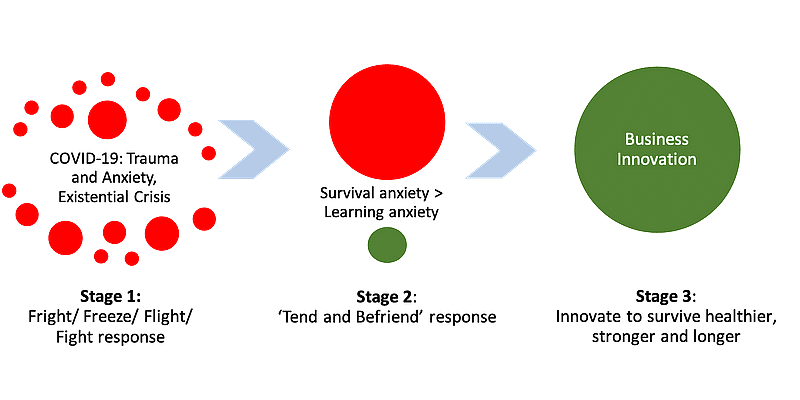 Stage 1: From Fright/ Freeze/ Flight/ Fight/ Flag/ Faint response:
Between November 2019 and Jan 2020, businesses were in a state of shock and awe, brutalised by the sheer spread of the virus and its colossal impact on their fate. In this state, businesses panicked, some froze by the act of dissociation.

Stage 2: ‘Tend and Befriend’ response:
Between February 2020 and now, we are seeing early signs of businesses learning to build hope. There is a demonstrated tendency to affiliate with one another, build responses to fight the crisis, and some have begun innovating already. A look at the World Economic Forum (WEF) responses indicate that most of these innovations are healthcare related and curative in nature, while a few are focussing on being preventive.

Some of the industries other than healthcare witnessing survival issues are retail, logistics, travel, hospitality, tourism, food, media, gaming, entertainment, electronics, wearables, telecom, consumer financial services, psychology, professional services such as consulting, human resources such as staffing and search, public relations and communication, startups, digital technology, etc. Take a look at some examples of their coping up mechanisms.

Stage 2 is the most critical one for the industries, which find themselves the most vulnerable. The nightmares of being dead are no longer infrequent for entrepreneurs. The survival anxiety is at its peak, and we would like to believe that it is greater than learning anxiety. If so, this is what should cause them to learn. And learning is an essential ingredient to innovate.

The behaviours on the process of coping are being researched as a part of ‘tending and befriending’. Tending and befriending means businesses which face survival crisis increasingly huddle together, collaborate, and support each other, should they rationalise that not doing so would mean being alone, socially distanced, and eventually lonely and depressed. This is an adaptive behaviour observed in individuals, and also observed in organisational systems.

Businesses that do not befriend each other will face greater extinction risk due to depression setting in pretty quickly. The depression episodes the organisations that do not embrace this notion mimic what a depressed individual goes through. One could find indicators of organisational depression in high attrition, disengaged employees, disputes between the owners and partners, breakdown of communication or false communication, frauds, high dissonance, defensive behaviours, aggressive M&A waves or period of inactivity, withdrawal and perhaps, unsung, unnoticed death, eventually.

Survival anxiety could also cause alienation and extinction. It is only when it exceeds learning anxiety that it has the power to cause innovations leading to profitable and scalable survival. The choice is a matter of being conscious of what would cause own death and whom does one ask for help, and how speedily one acts on it. The survival anxiety being put to use by innovating is a function of collaborations and partnerships in current times of resource crunch. Any monetary currency will become hard to commit for businesses, as they learn ‘frugality’ once again, in the new order.

The question is how committed are the owners of businesses in dropping their ‘I’ and ‘befriend’ each other transcending rivalries, boundaries, and barriers willingly to create innovations that would save the world, together. The wise know that the future of business belongs to the community-based co-creation and collaboration of value, and not to the lone warriors fighting the battles to attain martyrdom.