Reversing the trend of jobless growth

In a jobless growth economy, unemployment remains stubbornly high even as the economy grows. This may be because relatively large number of people may have lost their jobs or new members entering the work force are much higher than the jobs available. In India, the latter seems to be the case, thereby obstructing the benefits of growth from reaching the masses.

While analyzing the paradox of India’s jobless growth, I have categorized the reasons and possible solutions into a ten-point action plan:

Formalize labour arrangements: India experienced decline in jobs due to a reduction in contract workers (nearly 70,000 were retrenched in the first half of FY 2016, compared to 161,000 additions in the first half of FY 2015). Contractualisation is a universal phenomenon and the solution is to simply end the informal nature of employment. Better pay, job security, safe work environments and social security benefits will only help workers bring out their best. In fact, companies making high-specification products realise that contract labour can lead to batch rejections.

Increase business sentiment through strong reform measures: Employment in export units, reeling under shrunken global demand has seen a sharp decline. In the automobile sector, only a handful of jobs have been added. Large manufacturers are trimming operations; Nokia, has shut down its handset factory in Chennai rendering 8,000 workers jobless, and for Microsoft, the new owner of the Nokia, making smartphones in China and Vietnam was cheaper. Following on the heels of Goldman Sachs and Nomura, JP Morgan Asset Management also exited its onshore India-based mutual funds business. Cement major Lafarge is another case in point. The focus should be on kick-starting the investment cycle, incentivize job creation by giving infrastructure a push, finding a way to lower interest rates and improving ‘ease of doing business’.

Improve the labour-absorption in Indian economy: The economy is generating fewer jobs per unit of GDP – more work is now being done with fewer employees due to significant improvements in automation, robotics and productivity. Therefore, more focus on labour-intensive sectors will generate employment. While sectors like financial services, e-commerce and financial technology seem obvious as ones to focus upon, the significance of new economy enterprises should not be underestimated. These could be in education, healthcare, e-commerce and hospitality. Green sectors such as solar energy and wind will be the ones to watch out for in the long run.

Schemes to promote the growth of MSMEs: Arresting the lackluster global demand and weak exports coupled with the need to diversify the exports basket are dire needs of MSME sector. Enhancing the employment potential of MSMEs is critical as the sector contributes to nearly 40% to India’s manufacturing output, employing around 14-crore workers.

Skilling for an industry-ready, job-ready workforce: Given India’s demographic dividend, it acquires special significance. With 54% of our population below 25 years of age, we are sitting on a massive workforce. Unfortunately, many of them are unemployable with their skills not matching the emerging industry requirements. While curriculum has largely remained static, its application has become increasingly dynamic. The major gaps in skills are in industries such as the auto industry, building and construction, textiles and retail. Aside from this, there is a skills shortage for jobs ranging from welders to masons and from electricians to nurses. Today, industries require market driven skills to meet their business needs of higher productivity, lower costs and higher efficiencies. Hence, it is imperative that apart from beefing up their in-house training facilities, the industry focus on tie-ups with educational and training institutes, and refurbishing the curriculum, content and teaching/training methodologies.

The manufacturing sector needs a boost: While the service sector contributes 58% to India’s GDP, the manufacturing sector’s contribution is 24%. India’s late policy resurgence towards manufacturing is the main reason why the country lags China. The sector’s unique role in triggering structural change has remained unattended while we have focused on the less employment providing, less tradeable and less technology oriented service sector. India is not likely to emulate a situation like China’s where 34 per cent of its labour force is involved in manufacturing. However, even if we can increase this to 20%, up from the current 11%, it would account for another 100 million jobs!

Producing periodic and reliable data on employment: Regular estimation of job numbers and various indicators related to it has long guided policy creation in some of the other successful economies. Employment generation must be the soul of Indian policy creation, and to do that, it is imperative to know the statistics on the same periodically. The last time India carried out a focused and comprehensive estimation of the employment situation nationwide was in 2012 through the 68th round of NSSO. Needless to say, these figures are no longer used for gauging policy exigencies in the country.

Promoting and tracking the entrepreneurial sector: Many of the jobs in the economy are created by the Flipkarts, Myntras and Snapdeals of the world, and these jobs are not picked up by the numbers. Startups can be an engine of job-creation. According to NASSCOM, 3-4 IT start-ups are born every day in India and that India has emerged as the third largest startup base with these ventures poised to grow 2.2 times to reach 10,500 by 2020 despite a perception that the ecosystem in the country has slowed down. India is in the third position just behind US and UK but ahead of China and Israel, with nearly 1,400 new startups in 2016, up by 8-10% from 2015. A focus on this sector could lead to new employment opportunities.

The dignity of Labour: This remains an exotic concept in India. Shuffling papers is seen as more dignified as compared to holding a torque wrench and rolling up of sleeves on the shop-floor. The faster this mindset changes, the better it is for India.

UNDP’s “Asia-Pacific Human Development Report 2016” report has warned that India is likely to face a critical shortage of jobs in the coming 35 years. There are two ways to look at this – as a massive wave of unemployment and a demographic disaster that will leave India floundering or as an unprecedented resource for wealth creation and demographic dividend that will outpace much of the world if equipped with the right skills. 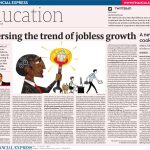