Romesh being conferred the degree of Doctor of Science (Honoris Causa) at IIT Bombay on 11.08.18. 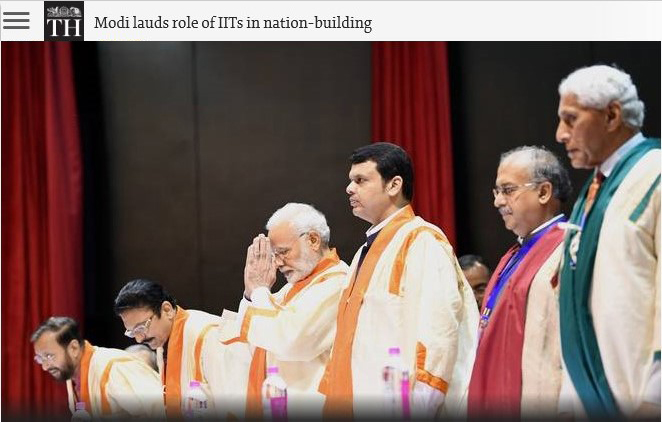 The degree was conferred in recognition of Dr. Romesh Wadhwani’s outstanding contributions as a technologist and a business leader, and for his efforts in creating social impact through innovative uses of technology, which enriched a large number of lives across India and many other countries.

Addressing the diamond jubilee convocation of IIT Bombay, Prime Minister Modi congratulated the ‘diamonds’ of IIT Mumbai on their graduation and also its illustrious alumnus Dr. Romesh Wadhwani on being conferred the Doctor of Science degree.

“Dr. Wadhwani has devoted his life to connecting technology with social welfare needs. Through Wadhwani Foundation, he has empowered the youth of India by facilitating employment generation and creating a culture of innovation and enterprise. It is a matter of pride for IIT Bombay that it has many alumni like Dr. Romesh Wadhwani who are actively contributing to nation building. The nation is proud of IITs and their achievements,” he added.

Dr. Wadhwani is a successful Silicon Valley entrepreneur and philanthropist with passion for large-scale social change. After building three successful companies, the last of which sold for over USD 9 billion, he founded the ‘Wadhwani Foundation’ in 2000 and subsequently the ‘Wadhwani Institute of AI’ for social good to which he has committed to donate most of his wealth. He envisions high-impact social change through sustained economic acceleration of emerging economies.

The Wadhwani Foundation has the primary mission of accelerating economic development in emerging economies through large-scale job creation and fulfilment. It is present in 20 countries of Asia, Africa and Latin America operating in association with governments, educational institutes, corporates, mentors, and investors and its initiatives are driving job creation and fulfilment through entrepreneurship, skills development and innovation.

Dr. Wadhwani is a member of the Gates Buffet Giving Pledge. He is also the Founding Chairman and CEO of Symphony Technology Group, a 12-year old PE firm comprising of 23 companies, with a combined revenue of USD 3.5 billion and 18,000 employees.

He is a proud recipient of the prestigious ‘Non Resident Philanthropist’ award at the Forbes India Philanthropy Awards 2013 and also features in Forbes 400 list. He obtained a B.Tech degree from IIT Bombay and an MS and Ph.D in Electrical Engineering from Carnegie Mellon University.