Fillip to spirit of innovation

In 2015, investors pumped $9 billion into Indian startups. And during the same period, India created eight unicorns, startups with valuations topping $1 billion or more. To put this in context, just two years ago, the total investment into startups was a paltry $760 million and India had no unicorns. So, there is no doubt that 2015 was the biggest year for Indian startups.

The startup fever seems to be the highest in Bengaluru, the National Capital Region and Mumbai. More than 65 per cent of the startups are concentrated in these three cities. Chennai, Hyderabad, Pune, Ahmedabad and Jaipur are also emerging as startup hubs.

On January 16, the government threw its weight behind entrepreneurs to support them by announcing ambitious policies to remove all stumbling blocks. The government’s intention is very clear. It wants entire India to be the hotbed of startup activity, not just a few cities. It wants all of India to be the “Silicon Valley” which may be a model to aspire for, but what India needs to emulate to fast track its way into becoming the top destination for entrepreneurs is not the Silicon Valley, it is Israel.

With hardly 7 million people in 2009 (that’s less than Mumbai), Israel had more Nasdaq-listed companies than the entire Europe. Today, it produces about 1,000 new startups every year. And for every startup that fails, two new ventures sprout. This is what India needs to achieve.

The story of how Israel has succeeded disproportionately to its size and to its geopolitical situation has valuable lessons for India. So, what did Israel do right? And does India have much in common to emulate the model successfully? In their book “Startup Nation: The Story of Israel’s Economic Miracle,” Dan Senor and Saul Singer identify key ingredients that helped Israel become the dominant ecosystem for entrepreneurs, outside of Silicon Valley.

First, the entire country thinks it is a startup. The term startup has become such an integral part of the day to day vocabulary that anytime someone even cooks a meal with unexpected ingredients, people think that the chef is thinking like a startup. Innovation, finding new ways to do things and questioning the status quo have become ingrained into people’s psyche. In India, we are seeing the beginning. Prime Minister Narendra Modi’s “Startup India, Standup India” is a great beginning to inculcate this new way of thinking, the entrepreneurial mindset.

The second ingredient is the availability of breeding grounds for entrepreneurs. In Israel, surprisingly, the Israel Defense Forces (IDF) filled this role. Unlike most defence establishments, IDF itself behaves like a startup by promoting a relatively non-hierarchical environment and encourage creativity and intelligence over discipline and conformity.

In fact, the genesis of Silicon Valley can be traced to one company that unwittingly acted as one such training ground its entrepreneurs. The eight engineers who quit Shockley Semiconductor Laboratory in 1957, popularly called the traitorous eight, created their first entrepreneurial venture called Fairchild Semiconductor. Fairchild ended up being a fertile training ground for entrepreneurs like Andy Grove and resulted in great companies like Intel and AMD.

We don’t have this in India yet. The current wave of successful companies like Flipkart and Ola could soon unleash many aspiring entrepreneurs into the economy. This is likely to start as soon as the current employees are able to cash out their stock options. Even large MNCs like Microsoft, Google and Facebook will start seeing some of their top talent leave to start their own ventures.

The third and the last ingredient is a pro-startup government and startup-friendly policies. Every successful startup ecosystem, whether it is Silicon Valley or Israel, has a supportive government that acts as an enabler and gets out of the way of entrepreneurs.

The sweeping announcements made by the prime minister at the “Startup India, Standup India” event is the first step towards this. We should expect even more startup-friendly announcements in the upcoming budget. The Rs 10,000 crore fund is a nice start, especially if it can be channelled to help areas that traditional Venture Capitalists often ignore, such as rural and social entrepreneurship.

As a breed, we Indians know how to thrive under challenging conditions and use “jugaad” innovation to improve the lives of people around us. This is the essence of being an entrepreneur. With the startup momentum at its full swing and the present government’s intention to play the role of an enabler, this seems to be the best time to be an entrepreneur in India. 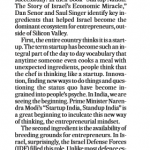