Let us take the example of the challenges with COVID-19. As the vaccine rollout began, US citizens were given handwritten vaccine record cards. Fake vaccine cards were available online on eBay and Amazon!  On the other hand, India got together a team of technocrats and technologists who built CoWIN (Covid Vaccine Intelligence Network). While many in developed countries struggled to showcase their vaccination passport in the initial months, Indians could breeze through with digital vaccination certificates by scanning a QR code in apps such as DigiLocker or Aaroya Setu! No wonder, over 50 countries have shown an interest in the CoWIN app. From being a laggard in technology, India is showcasing its powers in the digital arena, especially in the area of citizen service delivery!

Over the past years, with large-scale automation and digitization by the government at both central and state levels, policymakers have access to large amounts of data that can be used to make new policies and evaluate existing policies. There is an increasing focus among policymakers to leverage emerging technologies such as Artificial Intelligence, Machine Learning, Blockchain, IOT to improve the delivery of public services, strengthen governance, and make better-informed data-driven decisions.  Some states are using data analytics to shift through mounds of data to identify places where new hospitals or schools or other infrastructure should be set up.

Challenges persist for policymakers. Constrained budgets, legacy technology, multiple data sources which sometimes do not talk to each other, inconsistent data quality are a few issues that they continue to grapple with. Despite these challenges, it is encouraging to see many government departments at the state and central levels take steps to embrace emerging technology for better citizen delivery.

The JAM Trinity of the Jan Dhan-Aadhaar-Mobile has helped the government save Rs 1.70 lakh crore of taxpayers’ money. Tax departments are using AI-based tools to identify probable defaulters. The agriculture department in many states is using AI-based tools to suggest the best time to sow the seeds and optimise water usage, as well as reduce crop losses through integrated pest management. Many PSUs are using NLP based Chatbot to help users access information from websites on a 24X7 basis and the government is planning a conversational engine that can be deployed on the UMANG platform, which hosts various apps that provide government services to citizens. Hospitals are using computer vision-based applications to interpret x-rays. State governments have started the process of using blockchain for property registration and land records.

We acknowledge emerging technologies are not a panacea for all ills and we need to be cognizant of the ethical concerns these.  A lot remains to be accomplished. However, the will and motivation to enhance social good through technology is encouraging. India is set to become the leader in using technology for the public good. 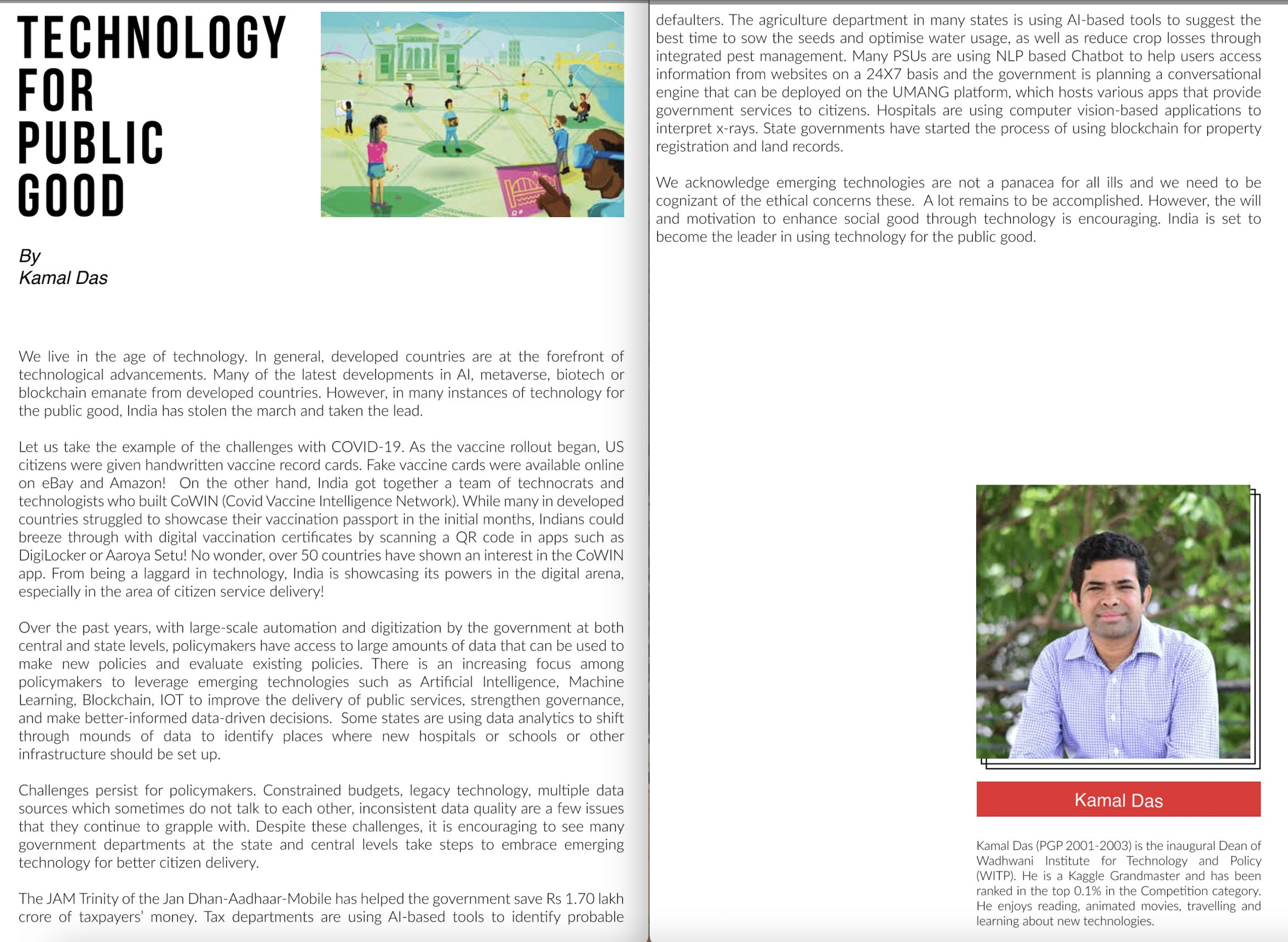