Under-Skilled and Outdated: Why India Could Lose Out on Nearly $1 Trillion in GDP if it Fails to Upskill its SMEs

Small and medium-sized enterprises (SMEs) play a major role in India’s economy, accounting for around $700 billion – roughly 27% – of the country’s $2.6 trillion gross domestic product (GDP) in 2020, according to Wadhwani Foundation’s analysis.

However, impressive as those numbers sound, they represent a decline from the estimated 30% of GDP that India’s SMEs contributed before COVID-19 struck. And they raise doubts about policymakers’ stated hope of increasing the SME sector’s share of GDP to 40%, to benefit the rural poor.

Wadhwani Foundation was founded to accelerate job creation in India and other emerging economies through entrepreneurship, small business growth and skilling. Our analysis suggests that if the SME sector isn’t given the support it needs, India risks losing out on around $0.75 trillion in GDP contribution from its SMEs by 2027.

To avoid that outcome, the country needs to make a substantial commitment to SME skilling efforts, training these entrepreneurs in efficiency, leadership, data analytics, innovation, program and change management, and other areas that are essential to running a successful business. Yet Indian government and private expenditures aimed at skilling entrepreneurs (not including consulting or advisory services for enterprises) currently amount to the paltry sum of $500 million/year, which is a tiny fraction (under 0.02%) of the country’s GDP. That’s simply not enough funding to achieve this vital goal. Below, I’ll discuss why entrepreneur skill development needs to be a higher priority for India, and what public and private sector stakeholders can do to deliver it effectively.

If India hopes to reach policymakers’ goal of boosting SMEs’ contribution to GDP to around 40% by 2026-27, the country has a lot of progress to make. The government is projecting annual growth of 7-8% in the coming years, which would bring India’s GDP to around $3.4 trillion by 2026. If SMEs are responsible for 40% of that amount, they’ll be contributing almost $1.4 trillion to GDP each year – that is double their current $700 billion. To even hope to achieve that goal, the country must boost its investment in SME skilling from the current $500 million to around $2.7 billion – a 5x jump over the next four years, based on our analysis. This funding gap, by all standards, is staggering.

India wants to transform our SMEs, but we have not invested in training the entrepreneurs that run them. Paradoxical, isn’t it?

NEEDED: A NEW APPROACH TO INNOVATION

But money isn’t enough to truly transform the country’s small and medium-sized enterprises: Innovative approaches are also needed. Unfortunately, many people’s view of innovation is based on the needs of large enterprises or tech startups. Most of the 50-odd companies in India with a valuation of $1 billion or more are technology and platform plays. And most of the innovation programs run by governments and private organizations focus on these agile and nimble tech startups, rewarding approaches that seem likely to increase the number of Indian unicorns. This provides great benefit to a few dozen entrepreneurs and their investors, but it could mean the demise of millions of SMEs, which must compete with these powerful and well-funded startups across several industries.

Both SMEs and the funding community that supports them need to rethink their approach to innovation: It is as important – or perhaps more important – a subject for SMEs than it is for tech startups or large enterprises. But these smaller businesses require a different approach: Indian SMEs need to focus on building businesses that can last for generations – not on maximizing valuations to enable investor exits after they attain unicorn status. Similarly, investors must shift their priorities and timelines, aiming to help these enterprises achieve decades of sustainable growth, rather than the 3-5 years of unsustainably rapid growth they typically favor.

To build their enterprises for the long term, SME owners themselves must also adapt, changing not only their approach to doing business, but also their attitudes about the value of skill development. What would prompt these entrepreneurs to think afresh and invest in developing their own business skills?

The graphic below demystifies why Indian SME owners are typically reluctant to prioritize skill development – and, as a result, why they’re falling short on investing in these programs in their enterprises. 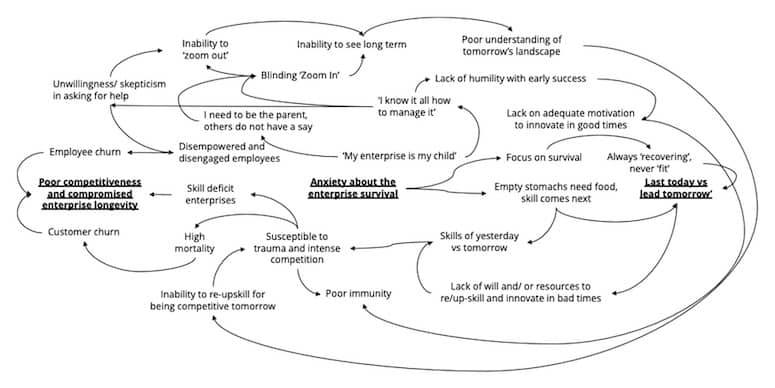 As the graphic illustrates, entrepreneurs’ anxiety, coupled with the lack of resources available to support them, is preventing them from zooming out and thinking of their long-term growth and sustainability. This anxiety has only grown worse during COVID-19, which has taken a devastating toll on these businesses. As a result, Indian SMEs are locked in a vicious cycle: They are so emotionally close to their problems that they have a tendency to “zoom-in” on solving their immediate challenges, which prevents them from recognizing and investing in their businesses’ longer-term needs. This, in turn, makes them more vulnerable to growing competition, as they fail to invest in the skills and innovations needed to compete effectively. In good times, they tend toward complacency and optimism about the future (“Why learn new skills when I am already making money?”). But in bad times, their need for cash becomes so severe that they view skilling initiatives as a risk for themselves and their enterprises (“How can I invest in new training when I am losing so much money?”).

Unfortunately, these entrepreneurs often don’t realize that a lack of skills will only accentuate and amplify the problem of scarcity they’re facing. And while there may be a realization of this hard truth among some SME owners, the actions of the broader sector do not indicate that they will be supported with anywhere near the $2.7 billion our analysis suggests is necessary over the coming years. As a result, not only skill development but also innovation – a strong lead indicator of enterprise competitiveness – become casualties.

The way to convert this vicious cycle to a virtuous one is to induce the necessary changes among SMEs through mandatory skilling and innovation programs, along with the necessary legal and financial support from the government to facilitate entrepreneurs’ participation. At the same time, SME owners need to institutionalize skilling efforts within their own businesses, to make these changes sustainably from within. This would require the active collaboration of multiple stakeholders from government, private bodies, educational organizations, funders, etc.

Our projections suggest that India’s SMEs could create around 50 million jobs and rise to the challenge of contributing around 40% of the country’s GDP by 2026-27 – but that’s under the most optimistic scenario. We also project that, in the most pessimistic scenario, many of these businesses could potentially contract or fail outright, rendering around 70 million people jobless and reducing the SME sector’s GDP contribution to just 23%, compared to its current 27%. We hope the country’s entrepreneurs – and the government and development stakeholders that support them – are listening.