WF-PRC team authors an article for TOI titled, “Skill India or kill India: How to cope with the impending demographic deluge”.

As the politics of fear and insecurity spreads its shadow over the Western world, and robots and 3D printing threaten to dislodge blue-collar workers worldwide, the jobs story is grim in the world’s fastest growing economy as well. At current rates, India will add 80 million new job-seekers by 2025, most of them unskilled. With 30 million new jobs projected at current rates, the picture turns depressing very quickly.

Higher education remains beyond the reach of three-quarters of India’s school-leaving youth. Not a huge loss, some argue. With an employability of 10-15% of its graduates, the mushrooming engineering and management schools are doubtful investments at best. Skilling, arguably, is the only practical solution to the impending demographic deluge for the world’s youngest major country.

It is, of course, hardly a cakewalk. By 2022, the nation’s skilling needs are estimated at over 400 million, well over 10 times our current rate. And it is not about the youth alone. Technology change routinely displaces thousands of middle-age workers. Every year around 60,000 ex-servicemen retire from the forces in the prime of their lives to join the civilian stream.

The impatience behind the recent PMO directive to expand the network of ITIs by over 50% in a single year is understandable. But the figures tell only a part of the story. Skills training remains “un-cool” for much of India’s youth. Training quality – in reality and perception – continues to hinder job prospects.

But if the woods ahead look threatening there is a hint of a path as well. Others have traversed the road that India must take and have left models and lessons in their wake.

Skilling not cool enough for youth? In Australia close to a third of the youth eligible for university admission routinely choose to go for skill development instead. China deals with the “perception” problem by providing stipends for skill development (not available for degree programmes).

Are there real jobs at the end? Australia places three-quarters of its skill-enhanced youth within six months of completion. Relevance is the key issue here. In China, at least a third of the curriculum for skill development is developed by schools in association with local enterprises. The Dual Skilling system of Germany supplements classroom learning with “in-site” training in industry settings.

Where are the teachers? A ten-fold rise in training capacity requires an unprecedented mobilisation of faculty. This in turn needs a certification system that can convert industry professionals into skill trainers. China has solved this problem through the creation of a carefully thought out training and certification system of skill trainers. Trainers there need to stay current by doing annual industry stints.

Everything in the classroom? Apprenticeship forms the bulwark of Germany’s skill development sector. It is widely used in China’s SME sector too. It has been central to much of India’s traditional skill development, whether with the father or with “Ustads”.

The challenge lies in formalising it, ensuring that the latest skills are picked up from the right workplaces, and scaling it country-wide. SMEs are often hungry for low-cost temporary workers. They are also the ones that most often complain about labour scarcity. Once again the challenge lies in building the bridges.

How to pull it off? At the policy level of course, the challenge is of governance and multi-stakeholder coordination. In China two national ministries collaborate to run the skill training apparatus. In Australia, the Council of Australian Governments (COAG) provides a platform for coordination among various policy players in the skill exercise.

India needs to travel down this road, but be Usain Bolt where others have ambled. The central government cannot be the lone sprinter though. Unlike China where a 1996 law pretty much dictated industry participation, in India the effort can succeed only through spirited participation of government – Centre, states, local bodies alike – and the private sector – industry of all sizes and sectors. And all out of enlightened self-interest, not patriotism. The clock is ticking, louder every day. 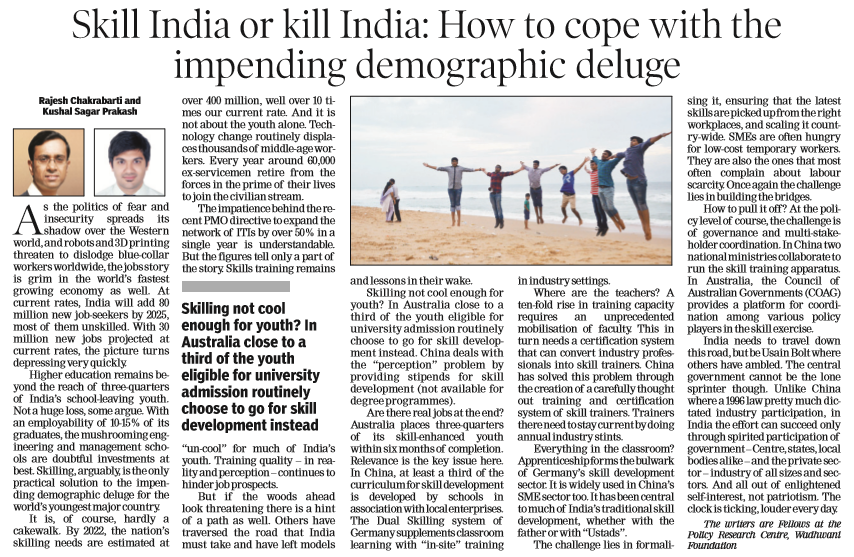