The World Bank has predicted that India’s GDP growth will be 7.2% in 2017-18 and 7.7% in 2019-20. This forecasted rate of growth vigorously supports India’s aspiration of being recognised as the most promising economy globally. But do these numbers paint the complete picture?

The Indian mindset has traditionally been biased towards looking at GDP figures as the most important indicator of development taking place in the country. In the process we may have neglected an equally important indicator: employment generation. And though employment is usually seen as a by-product of GDP growth, the reality in India cannot be more distant.

Estimates from NSSO and CSO data suggest that between 2004 and 2012, India’s net new cumulative job growth swelled by only 3% (or 15 million net new jobs) when the country’s economy expanded by a whopping 54%.

It cannot be denied that a nation of 512 million strong labour force cannot afford jobless growth. Employment generation has to be the soul of Indian policy creation, and in order to do that it is imperative to know the statistics on the same periodically.

But the last time India carried out a focussed and comprehensive estimation of the employment situation nationwide was in 2012 through the 68th round of NSSO. Needless to say, these figures are no longer very useful for gauging policy exigencies in the country.

Regular estimation of job numbers, and various indicators related to it, has long guided policy creation in some of the other successful economies. The US Bureau of Labor Statistics (BLS), a 2,500 employee strong arm of the US Department of Labor, invests approximately $600 million annually on finding facts in the field of labour economics and statistics. Its monthly employment report is regarded as a significant resource to evaluate government’s performance and render critical perspectives on employment generation and economic development.

India is getting started though. Government has just set up a taskforce under Niti Aayog vice-chairman Arvind Panagariya to produce periodic and reliable data on employment. This is an addition to another recent initiative by the PMO to have all cabinet proposals state the number of jobs they can create. The most redoubtable initiative in this space, however, comes from the statistics ministry which has recently announced plans to conduct periodic labour force surveys in the country to produce quarterly employment data.

With the launch of a plethora of employment related schemes in recent times, periodic labour force surveys would not only guide general policy creation in the country but also equip the central and state governments to diagnose and address challenges in specific industrial sectors and regions. Further, this exercise would bolster government’s capacity to create more meaningful jobs and eventually move towards formalising the economy.
Managing the labour markets effectively is an important strategy to ensure sustained and inclusive economic growth. Regular and comprehensive employment estimation is a crucial element of it. With the announcement of periodic labour force surveys, India has not only created an opportunity for itself to undo its recent lukewarm performance on the job creation front, it has also opened a lucrative window to make job creation the heart of policy formulation.

Growth in GDP figures may or may not create enough jobs, as is evidenced by what happened between 2004 and 2012. Creating enough jobs, however, will lead to sustainable GDP growth without a doubt. Recent initiatives by the central government on this front elicit optimism.

The writers work with the Wadhwani Foundation.
Times of India 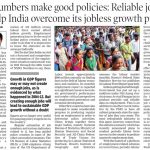