“You can truly address social issues only if you approach them in a manner similar to business”, says Dr. Ajay Kela, President & CEO, WF to MINT

Giving for a wider, meaningful impact

As the fastest growing economy globally, notching up 7.5% GDP growth in 2015, and a combined size of $2 trillion, one would expect India to have largely reduced poverty, illiteracy and high mortality rate and improved its health indices.

But ranked at 130 out of 188 countries on the United Nation’s Human Development Index in 2015, it clearly has miles to go. Social inequalities are addressed through a combination of government schemes, charity and corporate philanthropy. While much has been said and written about the limitations of government efforts in this regard, the private sector, despite a long philanthropic tradition, will also benefit from a change in strategy—one that will have wider and more meaningful impact. 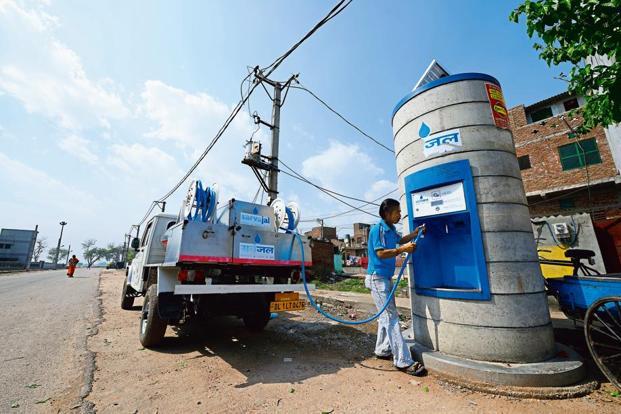 A file picture of a Sarvajal Water ATM at Savda Ghevra JJ Colony, New Delhi, being refilled. A clean break from the past could help address the mammoth scale of the social problems, suggest new-age philanthropists.

Most sector experts insist giving is inherent to Indian culture, but the 2015 World Giving Index suggests we are falling short. India slid 37 places in 2015 to rank 106 out of 145 countries.

So, ‘giving’ on a limited scale is not working. A break from the past could help address the scale of the social problems, suggest new-age philanthropists. Besides, entities involved in the business of giving want to see ‘impact’ and believe innovation and alternative approaches to resolving social problem are the need of the hour.

“Philanthropy in India has been largely associated with giving money, time, goods once in a while,” said Poonam Muttreja, executive director of the not-for-profit Population Foundation of India. She believes that philanthropy has so far been ad hoc and not enough attention is paid to a project’s impact.

“Philanthropy needs to be professionalized. It can no longer be about one-off instances of donating money or blankets. Or even setting up tailoring schools in the name of women’s empowerment,” said Muttreja.

Ajay Kela, president and chief executive officer (CEO), Wadhwani Foundation, agrees with Muttreja: unless scale becomes the focus of philanthropic ventures, impact will be low, he says. “The implementers of our philanthropy are not-for-profits, temples and charitable trusts—all of them have limited reach and approach. A temple can feed hundreds or perhaps thousands of people while the need is to feed millions of people. That’s why despite years of giving, impact has been minimal,” said Kela. According to him, scope needs to match the scale of the issues at hand.

The Wadhwani Foundation was set up in 2000 by US-based businessman Romesh Wadhwani (founder, chairman and CEO of Symphony Technology Group, an investment company) to encourage economic acceleration in emerging economies. In India, the foundation aims to create 25 million jobs by 2020.

“You can truly address social issues only if you approach them in a manner similar to business,” Kela said.

Scalability is also the mantra of The Hans Foundation set up in 2001. The foundation works in the areas of education, preventive healthcare, promoting water conservation and improving agricultural practices by providing aid to smaller organizations and setting up its own models in these areas.

Last year, the foundation focused on Uttarakhand—it aims to make the people of the state adopt a more sustainable lifestyle by 2020. The foundation moved to Uttarakhand following the floods of 2013, which killed close to 6,000 people and destroyed over 4,000 villages. Previously, its operations covered over 20 states.

“We aim to make Uttarakhand a model state, showcasing the best sustainability practices in the different fields of health, sanitation and agriculture, which can then be replicated nationwide,” explained S.N. Mehta, CEO, The Hans Foundation.

Leveraging technology to address social ills and not just to raise money is a priority at institutions such as the PwC India Foundation set up in 2008. Jaivir Singh, vice-chairman, said, “Today, unless we weave in technology in social interventions, the responses needed are neither adequate nor in time.”

Citing the example of natural disasters, Singh said most philanthropy is limited to first-aid solutions. “Following a disaster, the impacted community needs a lot more than just clothes or food. There is no follow-up or tracking of the impacted regions,” Singh explained.

PwC India Foundation is looking to use mobile technology, geo-mapping and geo-tagging of shelters that it built in Nepal after the April 2015 earthquake to closely monitor the progress of relief work and change track as and when needed.

As time passes, so do the needs of the people impacted, but the “help reaching them remains static in its approach and therefore impact is minimal”, said Singh who believes technology and appropriate data can change this.

Scale is just one aspect of the larger supply chain to addressing social ills. Paresh Parasnis, CEO, Piramal Foundation, stresses that partnerships are the answer, and the strongest partner is the government.

“At Piramal, our philosophy is to innovate, to find solutions that have not been tried before. We want our solutions to be replicable nationwide and to establish partnerships,” explained Parasnis. That is because, according to the foundation, the government has resources and reach but lacks quality, “which we think (foundations like ours) can address”, he said.

The Piramal Foundation is the Piramal Group’s philanthropic arm and was set up in 2006. In FY 2015, it collaboratively spent Rs.52 crore on social initiatives related to health, education, water and livelihood creation. Its Sarvajal Water ATMs, which offer clean drinking water at minimal cost, are considered a successful example of social enterprise—a business model based on social cause and returns.

A mix of approaches

However, no single approach is perfect. The founders of the Sehgal Foundation, Suri and Edda Sehgal explained, “Many approaches are needed in order to create an impact.” Focused on the 6,40,000 rural communities of India, the foundation works in areas of good governance, water management, agricultural development, community media and rural research.

“We have always believed in investing in people and giving them the tools to help them take advantage of opportunities,” said the couple in an e-mail response. According to them, “Development is a path that…never ends,” and, along with innovation, is the only way to provide solutions to social problems in collaboration with communities.

“Traditionally, philanthropy was based on a model of charity where a project continued to be dependent on donation. While that remains necessary for certain areas, in some models of philanthropy the idea of moving towards self-sustenance and reducing dependency is gaining ground,” said Jasbir Singh Grewal, executive vice-president, Fortis Healthcare Ltd and head of the Fortis Charitable Foundation. 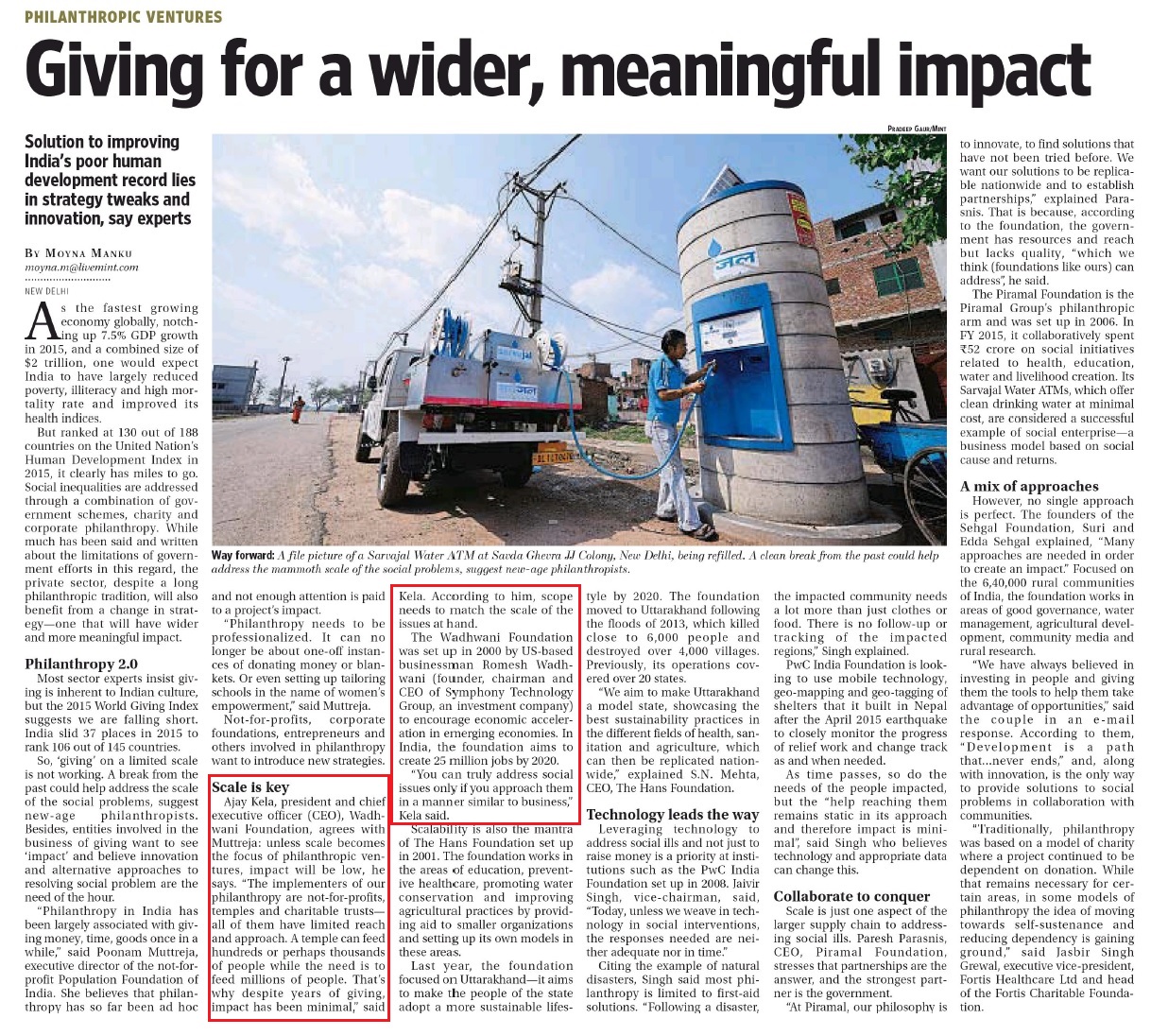