From the birth of a simple idea to creating skilled labour and boosting the economy, Dr Romesh Wadhwani’s the Wadhwani Foundation has come a long way. Founded in 2000 by Dr Wadhwani, the Foundation’s primary mission is economic acceleration in emerging economies. With large-scale education led initiatives driving skill development and job creation, the Foundation has launched five high impact education, training and research focused Initiatives in India that will lead to creation and fulfillment of 25 million jobs by 2020.

“The founder has been in the business of entrepreneurship which creates jobs and thereby, impacts lives. His underlying principle has always been that the best gift you can give someone is a high quality job,” says Dr Ajay Kela, CEO and President, Wadhwani Foundation who stresses that they don’t rely on any outside agency or anybody for funding their plans. Headquartered in Bengaluru, the foundation supports 40 colleges in Karnataka, out of which 32 are here in the city. “We have been inspiring students to become entrepreneurs. And, it’s worked, our students are creating and starting companies rather than opting for regular day jobs. On an average, about two or three students come together together and create companies,” says Dr Kela. The foundation’s entrepreneurship training course has been actively adopted by some 300 colleges across the country. However the focus was not restricted to creating entrepreneurs.

Supporting the entrepreneurs is just as important, to maximize the chances of success, because it’s a tough job! “Our first generation entrepreneurs need hand-holding and a great deal of mentoring. We had to create a mentoring network, because we want them to be able to support their families,” said Dr Kela. He explained that about nine million students pass their twelfth grade exams each year, with about four million of those joining college.  The remainder find it difficult because it’s difficult to support your family without a college education.

Established as the National Entrepreneurship Network (NEN) in 2003, NEN has built a strong network with 600 colleges, more than thousands of mentors and  faculty across the country to inspire, educate and support emerging entrepreneurs. NEN’s Entrepreneur Academy features hundreds of short videos from experienced entrepreneurs, angels investors, college VCs and dozens of longer video courses and blog posts.

The Foundation is now concentrating on building a vibrant city and is looking at three cities for a pilot project. “If it is workable, then we will work on our ultimate goal, which is to create vibrant city ecosystems where students are inspired to become entrepreneurs,” said Dr Kela, adding, “The skilling ecosystem is one of the five initiatives that we are working toward, the goal of each being the creation of high quality jobs which provide people with high-enough salaries to support their families in comfort. We hope to scale it to 100 city ecosystems.”

Also, their Skills Development Network (SDN) has developed and implemented several major skills initiatives with MHRD and state governments providing support to vocational education programs across more than 1400 high schools, 18 UGC colleges and above 100 companies. SDN uses a technology platform for ‘skilling’ by integrating online/in-class skills education through a digital and video curricula and pedagogy. “We seek to create transformational, sustainable and scalable economic acceleration in niche areas of emerging economies, resulting in positive and high-impact outcomes,” he says. 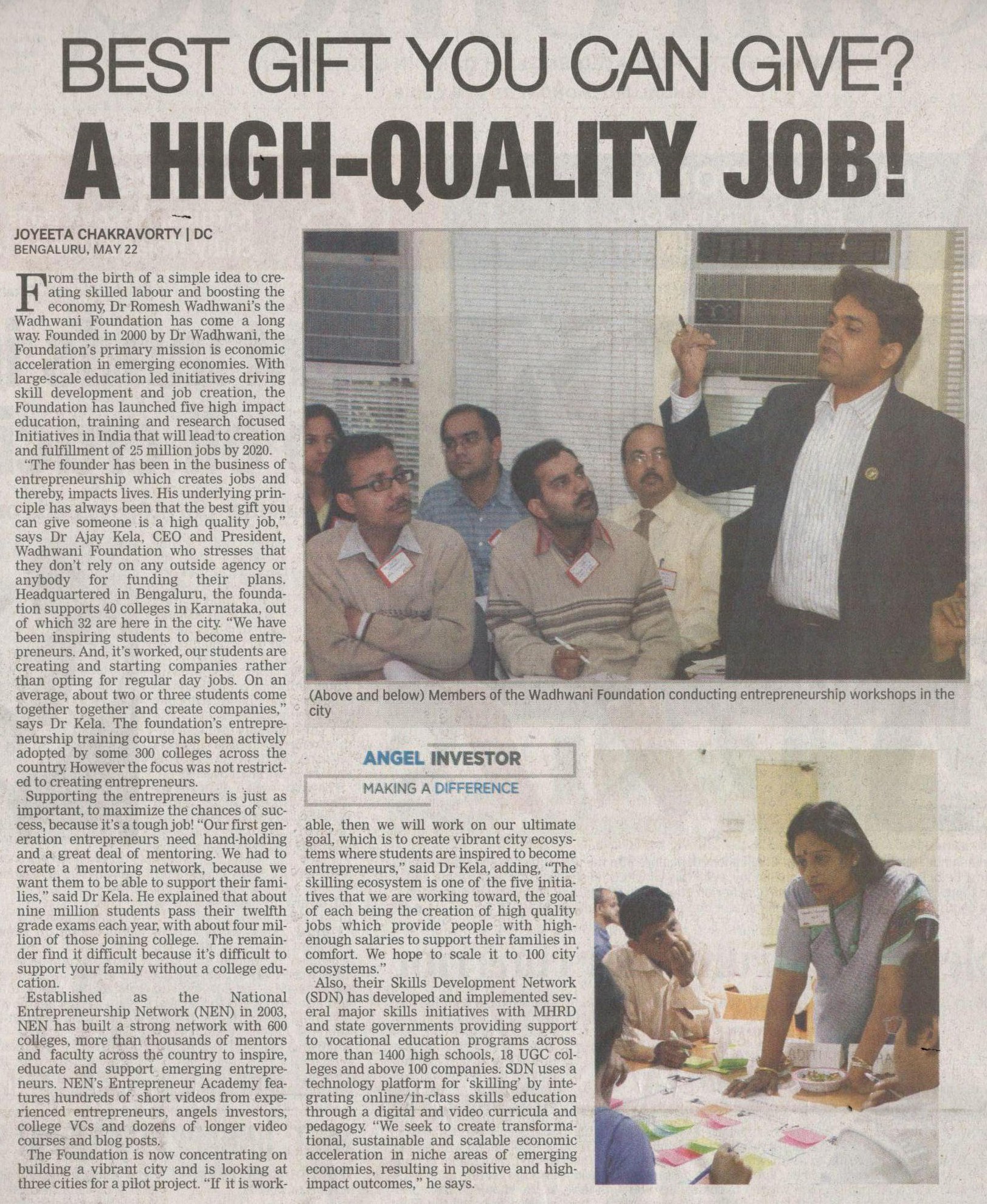