Wadhwani Foundation was set up in 2000 by Dr Romesh Wadhwani with the mission of accelerating economic development in emerging economies through large-scale job creation. The foundation is present in India, Indonesia and Malaysia, operating in association with governments, corporates and educational institutes. It has plans to expand to other countries in Southeast Asia, Africa and South America. The foundation has launched five high-impact skilling, entrepreneurship and innovation-focused initiatives in India, which, it says, will lead to creation and fulfilment of 25 million jobs by 2020. Ajay Kela, the president & CEO of Wadhwani Foundation, shares with FE’s Vikram Chaudhary these initiatives and tells why it is on course of achieving its target. He says that of these 25 million targeted jobs, 5 million will be created by start-ups, 15 million through enabling SMEs, and another 5 million by enhancing the skills of entry-level workers. Excerpts:

What are the initiatives that can lead to creation and fulfilment of 25 million jobs in India by 2020?

Third, the Opportunity Network for Disabled (OND), which places the educated disabled in sustainable, high-quality corporate jobs. As many as 8,000 people have already been placed. OND, in partnership with the government and industry, is building capacity to place 1 lakh people over next five years.

Fourth, the Research and Innovation Network (RIN), which aims to create a world-class innovation ecosystem in the country. The Wadhwani Research Centre for Bioengineering at IIT Bombay and Shanta Wadhwani Centre for Cardiac and Neural Research at NCBS, Bangalore, have been set up by RIN.

It’s too early to say. But we have made great progress in building tools and partnerships with central and state governments across all our initiatives. Wadhwani Foundation has entered into MoUs with MSDE, ministry of defence, Department of Empowerment of Persons with Disabilities and with states of Haryana, Himachal Pradesh, Jharkhand, Bihar, Kerala and Rajasthan. These PPPs, we believe, will scale up job creation efforts multiple times.

Can you provide us a breakup of these projected 25 million jobs?

Of these 25 million jobs, 5 million will be created by start-ups, 15 million by helping SMEs accelerate their growth, and another 5 million by enhancing the skills of entry-level workers. These jobs will be spread across sectors, with a primary focus on infrastructure, technology, retail, defence, healthcare and education.

What, in your opinion, are the reasons for the disconnect between GDP and job growth in India?

India’s cumulative GDP growth during 2005-12 was a remarkable 54%. But the net new cumulative job growth was only 3%, or 15 million net new jobs—a little over 2 million per year. This is an extraordinary disconnect, especially since the workforce grew by 6-7 million job-seekers annually and an economy apparently on the upswing was not being able to generate enough new jobs.

The economic policy has centred around achieving GDP growth and there has been little focus on aligning GDP growth with job growth. The impact on high-quality job creation, therefore, has been abysmal. While burdensome labour laws have kept formal employment low, infrastructure issues and perverse duty structures have made manufacturing uncompetitive. The services sector growth has been haphazard, and not as a result of any conscious policy. So, while output has grown on the back of demand growth, long-term development of human capital has lagged behind.

So, how can we link GDP growth with job growth?

Globally, 60-70% of all new jobs in most economies are created through start-ups and small businesses, whereas large businesses tend to optimise their growth through productivity increases. India needs to build a vibrant entrepreneurial and innovative ecosystem. In addition, the government should have some specific focus areas.
* Have a job creation objective in every new scheme that it launches;
* Have competitive initiatives to fund and reward research and innovation among start-ups and small businesses;
* Create high-quality entrepreneurial and skilling ecosystems across Smart and Amrut cities, engaging not only academic institutes, but also employers and communities of mentors, investors and incubators;
* Leverage technology for scale and adopt innovative ways of imparting teacher and student training.

What kind of policy framework is needed for skilling?

By 2020, about 60% of India’s projected population of 1.3 billion is slated to be in the working-age group of 15-59 years. Today, with 54% of our population below 25 years of age, we are sitting on a massive workforce. A majority of them will be unemployable, with their skills not matching the emerging industry requirements. That eventuality is less than five years away. We are staring at two scenarios—a massive wave of unemployment that will leave India floundering or an unprecedented resource for wealth creation. Skill India Mission and Start-up India will have a direct impact on quality job creation and skilling. However, we need to do more in terms of vocationalisation of high schools for market-driven, localised services and manufacturing needs; transformation of ITIs to make them more market responsive to local needs; developing apprenticeship opportunities; strengthening vocational training & education (VTE) curriculum; professionalising VTE faculty; setting up of a separate UGC-equivalent governance body for VTE; and creating a national VTE outcomes and impact database.

How closely do you work with the National Skill Development Corporation (NSDC)?

We have signed a tripartite MoU with MSDE and NSDC. We three partners will jointly set up a National Project Implementation Committee (NPIC) that will review the working of Programme Management Units (PMU) on a periodic basis. We see an immense synergy between NSDC and our SDN. In fact, SDN has partnered with NSDC to conduct National Skills Qualifications Framework (NSQF)-led placement drives.

The scale of the problems in India and other emerging economies is unprecedented. We, therefore, have picked up entrepreneurship, skill development and innovation as focus areas and are addressing them in totality by leveraging technology, building targeted networks and establishing sustainable partnerships, especially with central and state governments.

Government partnership, being the cornerstone of our model, is also our biggest challenge, given the dynamic nature of changing governments and even more transitory nature of the bureaucracy. Hence, to maintain continuity, building deep roots within each ministry or department is critical.

On building networks, the challenge is reaching out to millions of stakeholders. Here, we are leveraging consolidators such as academic institutes for entrepreneurship and skill development, and industry bodies or wealth managers for mentors and investors.

Yet another challenge has been in building technology solutions as the linchpin for reaching the masses. We have hired the best technologists from both India and Silicon Valley, and now have a 100-plus member team of technology and education experts to build game-changing learning and dissemination systems. 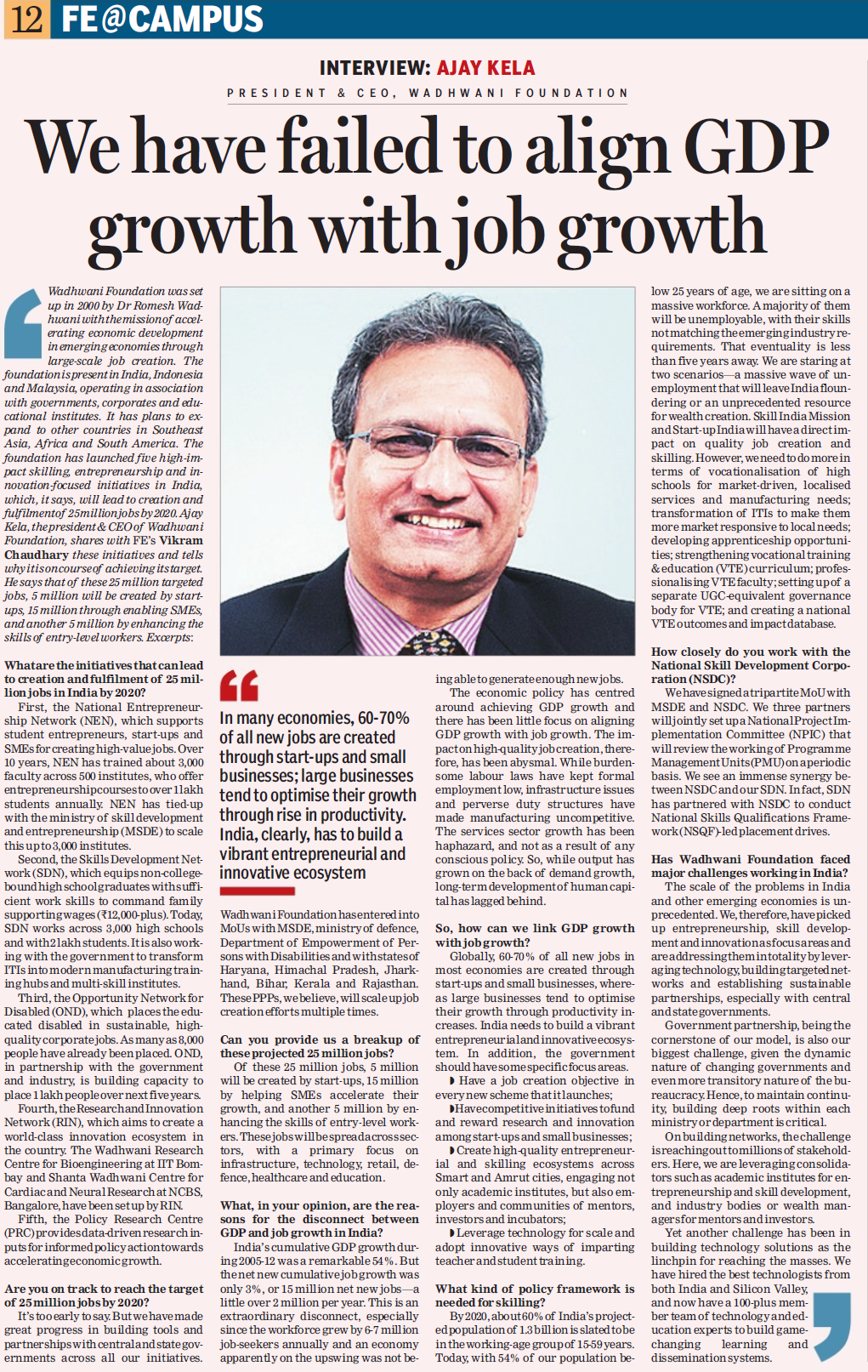