Generational shift plays out in multiple ways. In 2017, Mumbai-based Ajit Singh Ahluwalia, 34, saw it in his father’s eyes. “Really? You don’t have to pay anything for it and it works?” Ahluwalia senior was in disbelief as he asked his son, the managing director of Surindra Engineering, a Rs 200 crore company which is a 50-year-old family business that makes steel pipes for the oil, gas and water sectors. The younger Ahluwalia was elaborating to his father about GlobalLinker, a B-to-B global global networking and transaction platform, which helps MSMEs (micro, small and medium enterprises) do business efficiently by creating company websites and digital product catalogues, connecting them with suppliers and customers globally and offering range of services from insurance to logistics. A shift is happening at MSMEs like Surindra Engineering as they change the way they do business, pushed forward by ambition and technology. It has been a harrowing time for the sector that was pummell by demonetisation and the goods and services tax (GST). But a digital wave and formalisation could see the dismantling of old practices and the emergence of companies that are sturdier and stronger, looking to scale and grow.

Sameer Vakil, cofounder of Mumbai-based GlobalLinker, which has 2.7 lakh MSMEs from 150 countries on its platform, says, “MSMEs are fragmented and don’t have economies of scale. Our platform helps aggregate demand and bring scale and efficiencies to a segment that never had it.” While GlobalLinker is free, it takes a commission on the businesses that companies bag on its site. “On services like insurance & logistics, I found them 5-8% cost effective,” says Ahluwalia. “On products, they are are a one-stop shop for everything.” 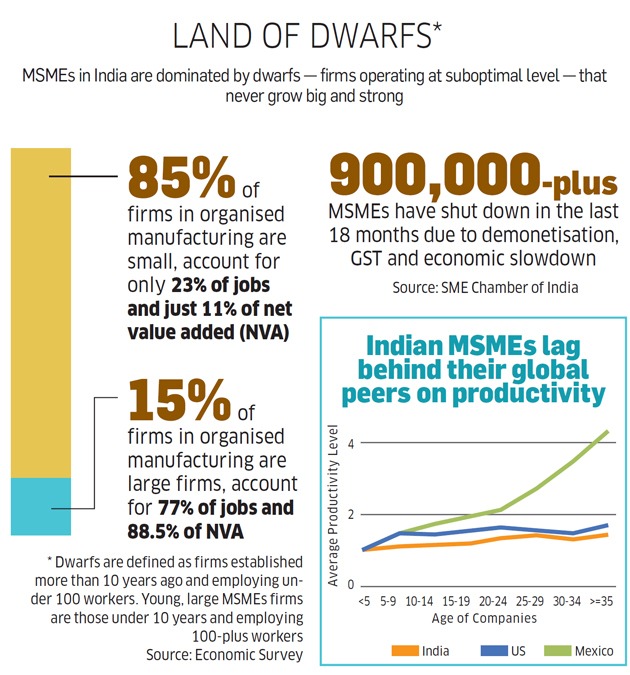 Recently, he became an exclusive distributor in India of a Spanish firm called Cevisa that makes bevelling machines, for which GlobalLinker helped generate 40 overseas inquiries. Ahluwalia wants to move up the value expand geographically and grow Demonetisation and GST hit many hard. But they are bouncing back. We are now seeing many becoming more productive. We, too, have big growth plans,” he says.

In the MSME world of gloom and doom today, Ahluwalia’s is a rare story. Even as India Inc hurts, MSMEs — at the bottom of the business pyramid — are the worst-affected. Small, unorganised and under the radar, they are often invisible, but their stress is evident. Demonetisation triggered it. And a slew of NDA government’s formalisation moves, including GST, proved fatal for many.

Big Churn
Could this bleakness have a silver lining? India’s 75 million MSMEs play a critical role in economic growth and employment. They contribute $1,183 billion to India’s GDP and create 180 million jobs. Yet, their world has always stood on shaky foundations. Only about 7 million are registered. About 97 per cent companies are small, employing less than 10 workers, with the biggest chunk having just one to three workers. For instance, hawkers and roadside vendors. About 96 per cent have no access to formal finance.

Suboptimal and cash-driven, Indian MSMEs are dominated by what this year’s Economic Survey calls “dwarfs” — small, weak enterprises that will never grow. Half of India’s labour force is self-employed, stuck in low-productivity jobs, barely able to make ends meet. Not surprisingly, on productivity, India scores poorly vis-a-vis countries like the US and Mexico (See chart, Land of Dwarfs). Only 3 per cent of MSMEs are competitive or have the bandwidth to export, says Praveen Bhadada, partner, Zinnov.

A slew of structural shifts — GST, digitisation, policy resets, generational change in family enterprises and low-cost technology tools — are changing the MSME world. These factors could help move it to the next orbit.

“Indian MSMEs are not fit and productive. Let’s accept that. Think of this difficult phase as a churn, a renewal process. It is painful but will help set us on a stronger growth path,” says Samir Sathe, executive vice president of Advantage India, Wadhwani Foundation, which works closely with MSMEs to build capacity. “The biggest shift is in the owners’ mindset. Young and ambitious, they don’t want to do business old-style,” adds Sathe.

Digitisation is helping solve many chronic issues like financing. Take Tushar Anand, 24, who set up his enterprise Pizza on My Plate in NCR last year. Starting an outlet costs about Rs 10 lakh. “But I didn’t have that kind of money,” he says.

Straight out of college, he decided to pursue an asset-lite model. He enrolled on Zomato platform and took space in its cloud kitchen on a revenueshare basis. Getting credit, though, proved to be an enormous challenge. “No bank would give credit to a firm that was under three years old,” recalls Anand. NBFCs offered credit at an unaffordable 18 per cent interest rate.

At that time, a fintech startup Indifi came to Anand’s rescue. Based on a three-way agreement between Zomato, Pizza on My Plate and Indifi, the latter offered Anand a Rs 35 lakh working capital loan at an annual rate of 10-11 per cent . “RBI sub-committee’s recent report on MSMEs has some fantastic suggestions. They have thought through issues like financing that MSMEs face. If implemented, they can be game-changers for the sector,” says Alok Mittal, cofounder, Indifi. Meanwhile, Anand operates out of two kitchens and has three outlets in NCR. In the second year, he hopes to log an annual turnover of Rs 5 crore.

Even as digitisation and automation wave swept through large enterprises, with technology tools like ERP (enterprise resource planning), these remained out of bound for financially stretched MSMEs.

Companies from Amazon, Facebook, Cisco and Google to KhataBook, Rivigo, Tally and Zoho are offering a range of free or low-cost, or pay-peruse tech tools to MSMEs. “SMEs have emerged as one of the fastest growing customer segments in India,” says Chandra Balani, head, geographic incubation (India & SAARC), Amazon Internet Services. Bhadada estimates that MSMEs’ digital adoption offers a $26 billion-plus business opportunity in India today, which will likely cross $80 billion by 2024. 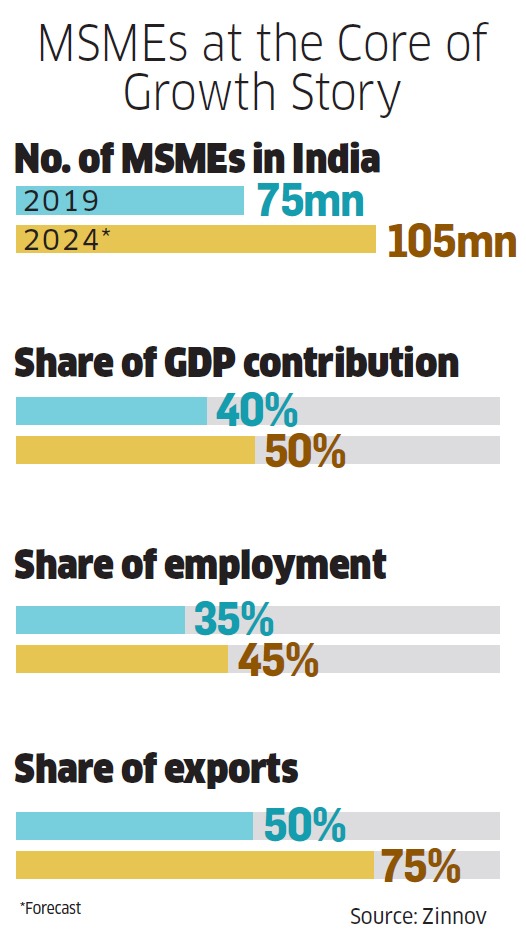 Aman Jain of the two-decade-old Aman Enterprises, a wholesale lubricant distributor in NCR, began using KhataBook in April this year. “I downloaded it from the Play Store. I wanted to upgrade from the old way of doing business,” says Jain, 22. Maintaining a physical ledger and keeping track of bills and payments of over 150 customers were difficult even with five dedicated employees.

Now he has all the information he needs realtime on his mobile phone. The app also sends automatic reminders to his customers about payments. “Earlier, everything was in the bahi in my office and it was a time-consuming process. Now, both my customers and I have the information we need,” he says. As a result, receivable recovery time has improved from an average of three months to one month.

Ravish Naresh, cofounder of KhataBook, says it has 3 million monthly active users from over 3,000 cities, who transact business worth Rs 20,000 crore. “Most of our users have just started using internet for business and are using our app to become efficient and automate processes.” In the next 12 months, Naresh is targeting a user base of 25 million and monthly transactions worth Rs 200,000 crore on his platform. 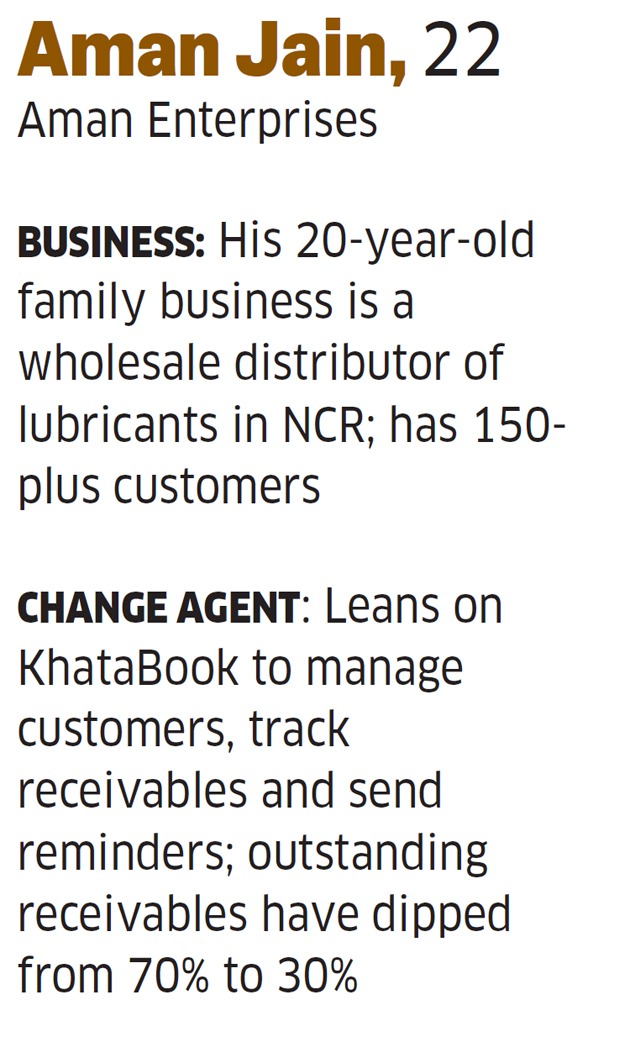 “GST rollout was an important inflection point,” says Tejas Goenka, managing director, Tally Solutions. Founded in 1989, Tally is a Bengaluru-based company offering software suite to companies. Before GST, it had a customer base of 1 million. After GST, its paid subscribers have surged to 2 million. Multiple factors like complicated GST, Jio’s cheap data and low-cost smartphones are driving adoption, he says. “Indian SMEs have poor control over their customers and supply chain. Slowly, they are discovering the benefits of automation. This will drive adoption,” he says.

Vidit Aatrey, cofounder of Meesho, is pushing MSME digitisation at another level. Meesho enables social commerce through platforms like WhatsApp and Facebook and has enabled 2 million SMBs to start business on its platform with virtually no capex. Many of them are first-time entrepreneurs and over 80 per cent are women. Meesho offers a range of onlineoffline training on how to market, get customers and manage accounts, handholding the entrepreneurs at every step. “Recently, we made our first investment in Meesho to support women entrepreneurs,” says Archana Vohra, director (SMB), Facebook India.

Enabling Environment
Changes at two other levels are catalysing shifts in the MSME world. Historically, perverse government incentives kept MSMEs small. For example, firms with over 100 employees need government nod before shedding staff. A plethora of laws and compliances — from the Industrial Disputes Act, 1947, to Trade Union Act, 1926, Factories Act, Contract Labour Act, 1970, and Minimum Wages Act, 1948 — would kick in after a certain threshold of workers. Further, since 1967, many product categories were reserved for SMEs. All these created perverse incentives for MSMEs to remain small and suboptimal with low productivity.

Policy tweaks are underway to tackle some of these. Start with the definition of MSMEs — earlier these were classified based on investments, which made things difficult for services firms with little investment. Now, it is based on turnover. With receivables being one of the biggest problems of MSMEs, the RBI set up in 2015 TReDS or Trade Receivables Discounting System to tackle it. “From 2020, companies will have to raise invoices on GSTN. Integration of TReDS exchanges with GSTN will improve compliance and tackle receivable problems,” says Sundeep Mohindru, founder, M1xchange.

MSME Samadhaan has been set up as a monitoring system for delayed payments. The new Labour Code on Industrial Relations, 2019, allows companies to hire workers for a fixed term, tackling labour law rigidities. It is now mandatory for 25 per cent of government procurement to come from MSMEs.

The stifling and difficult norms governing shops and establishments have been amended by many states. Mudra loan to ease MSME credit, skilling programmes to train unskilled workers and cluster development plans to nurture MSMEs have been rolled out by both the Centre and states.

Philanthropic entrepreneurs are chipping in. Anand Deshpande, founder, Persistent Systems, is using technology to equip workers to make a decent living. His not-forprofit DeAsra helps and mentors entrepreneurs like tailors, carpenters and beauticians by offering a virtual kit-in-a-box. DeAsra helps them with free basic information like how to open a shop, what are the procedures and approvals required and how to track cash flows and get customers. The information is segregated by trade and city. Every month, DeAsra gets 5,000-odd visitors of which at least 13 per cent pay for specialised services like mentoring and solving particular business problems.

Wadhwani Foundation, too, is working in the area. “Our mission is to work on a large scale to create high-value jobs that can support at least four family members,” says Ajay Kela, CEO, Wadhwani Foundation, which has five broad areas on which they work with MSMEs. “MSMEs are a goldmine for job creation. 70 per cent of all jobs are created by them,” says Kela. The foundation helps build their capacities and improve productivity. “Big companies go to Mc-Kinseys and Bains to get strategic help and grow. SMEs have none.

We want to offer this through techin-a-box concept,” he says. Starting in 2018, they are now in 20 emerging countries, including Mexico. In India, they are working with 200 SMEs, helping them explore new markets or new businesses to chase growth and create jobs. Next year, they will scale up to 2,000 SMEs.

Despite all-round efforts, the journey of Indian MSMEs will be difficult and painful. One, the complexity of the challenges MSMEs face is huge. Two, hit by multiple headwinds, they are reeling from simultaneous changes that will prove devastating for many. Already, job losses and unemployment have become serious socioeconomic and political issues. While government initiatives, from Mudra loan to TReDS, have been rolled out for MSMEs, they have had only limited success.

There isn’t an easy solution. But, for India, nurturing a strong and competitive MSME sector offers the only hope to create decent jobs at scale. Hopefully, electoral politics and economic pursuits will converge to give MSMEs the attention and urgency they deserve.