The initiative is just one example of multimillionaires and private foundations playing an increasingly important role in changing the global research landscape. Research in India has been starved of funds and good infrastructure, triggering the emigration of many scientists and technocrats. The brian drain is sometimes off-set by the trend of alumni from prominent institutes giving back to their alma mater – a recent example being that of Infosys co-founder Kris Gopalakrishnan, who donated a large corpus to IIT Madras and IISc Bangalore for the study of the brain.

Director of IIT Madras, Bhaskar Ramamurthi, says that funds provided by Gopalakrishnan will help the institute become a global player in this area. “Computational brain research is an emerging area with significant potential for invention of game-changing computing paradigms as we uncover new knowledge about how our brain works,” he says.

Indian Institute of Science director, Anurag Kumar, agrees with Ramamurthi about the importance of private funds in scientific research. “While we have become used to the idea of full government support for top institutions of higher learning, and of research in general, private sources will need to step in to support directed research and translational research. As our services and manufacturing industry moves up the value chain, they will need to increasingly support research.”

Many scientists are, however, wary of private benefactors controlling the scope of research and feel it shouldn’t be a substitute for public spending. “Philanthropy is an extremely valuable complement to government spending but it cannot be a substitute for it. It is also at its best if it comes with very few strings. Of course, donors have the right to define certain broad goals, but ideally, they should let scientists and engineers decide what is the best way to try and achieve those goals without imposing too many conditions,” feels Nobel laureate Venkatraman Ramakrishnan.

But Princeton University professor Manjul Bhargava, who was awarded the Fields Medal – the Nobel Prize for Maths – last year, is of the opinion that “receiving long-term research funds from private foundations allows one to take more risks – to carry out work on bigger and more fundamental problems that may not bear fruit for some years.” India could, he says, definitely benefit from private donors giving incentives to scientists to work on high-risk, high-reward projects.

According to a recent  article in the journal Nature, India is yet to become a major player in world science. The country’s research publications generate fewer citations on average than do those of other nations with a focus on science. This includes countries such as Brazil and China. The article does offer some hope for the country. “Businesses in the country are investing more in R&D, which bodes well for future innovation,” it says. Optimism, that we hope, is not misplaced.

‘THE NEW FOCUS IS ON UAV PROJECTS’
With a degree in electrical engineering from IIT Kanpur and a PhD from Carnegie Mellon, Prabhakar Goel has been an active venture capitalist involved with over 40 private companies. He talks about the research ecosystem in India and the way forward.

Why did you decide to fund research at IIT Kanpur?
The decision to create the Goel Foundation for Research was to give back to an institute that has been very valuable in my personal development. Our goal was to help accelerate the  applied research development in the institute. We were not looking to fund basic research but research that could be commercialized. The new focus is on Unmanned Aerial Vehicles projects. We chose UAV projects because we saw a huge opportunity to commercialize indigenous UAVs for the Indian market in areas like defence, commerce and agriculture.

What ails research in India?
The institutes need more industry and government sponsorship to drive research that is commercially relevant and has meaningful demand in the industry or in defence. Funding of such research in the US shows good practices that can be followed in India. There is a shortage of faculty that is motivated, qualified and has the passion to lead this effort and to attract other researchers and students. Institutes need to also find faculty or lead researchers that meet the requirements. Some of the IITs are moving ahead well in doing so and others are, unfortunately, still languishing. I would also suggest re-direction of some CSR funds towards applied research at the institutes. This would provide a fillip to industry funding of applied research.

India is home to close to several thousand -dollar multimillionaires. Yet, funding for medical research is insignificant.
Basic medical research in India suffers from the same lack of qualified, motivated, and passionate researchers at the institutes. Institutes in India can expect to receive such funding from multimillionaires only after they make a determined effort to seek research funding from the available sources, engage in attracting leaders that can build the teams needed to do the research, and sell their proposals to prospective donors. They also need to promote their institutes to be seen as leaders in research. Some of this is a chicken and egg problem and requires visionary leaders at the institutes to make it happen.

Do you think funding can tilt research in a particular direction?
Funding in the absence of qualified researchers  and visionary institute leaders will be a waste of funds. We really need to build a credible ecosystem for research.

‘FUNDING NOT NEW TO INDIA’
Former director general of the Council of Scientific and Industrial  Research(CSIR), R Mashelkar, on the importance of private funding for research.

Is philanthropy in science new to India?
The tradition of philanthropy is not new to India. In fact, it was JN Tata, who established the first-ever trust in the world in 1892, well ahead of the  Rockefeller Trust, the Andrew Carnegie Trust, the Ford Foundation, and the Lord Leverhulme Trust, all of which came in the 1900’s. Philanthropy will help in funding research areas that are either rarely or scarcely funded.

What should India do to become a global leader in  research?
There should be a cultural shift from the way things are run today. Among other things, the government should increase investments exponentially and scientific institutions should be de-bureaucratised.

‘BRAIN ULTIMATE CREATION OF NATURE’
Infosys co-founder Kris Gopalakrishnan has put in  Rs 350 crores for studying the brain. Here, he explains why he specifically  chose brain as a research subject.

Why did you decide to put in such a huge amount on studying the brain?
We will have more than 200 million people above the age of 65 in our country in the next 10 years. It is estimated that about 40 per cent will develop some sort of brain disorder – degenerative brain disease – related to ageing. The cost of supporting a person with brain disorder is of the order of ?20,000 per year at least. More importantly, the social cost on the families is even greater. We don’t have social security in India and these costs are not affordable for majority of the population. We need to find either cures or at least ways in which we can prevent further degeneration so that people above the age of 65 years can take care of themselves. The second reason for studying the brain is because I believe that some of the disruptions in computing will come from our deeper understanding of the workings of the brain. Brain is the ultimate creation of nature. We have decoded human genome recently and in some sense human brain remains the last frontier when it come understanding nature’s creations

What is the long term objective of the Center for Brain Research?
The Centre for Brain Research (CBR) being setup in Indian Institute of Science will undertake research on ageing and degenerative diseases due to ageing. It is planned to be a centre having 40-45 researchers working in these areas. It will also collaborate with other research organisations in India and abroad working on similar issues.

How do you plan to take this study  at a global level?
We are also partnering with similar efforts in research institutions like CMU outside India. I hope to create more such partnerships in the future. In November, there will be a global conference on Brain in Bangalore. we expect 10-15 world renowned scientists to participate from outside India. Similarly, in January 2016, a workshop on neuroscience and engineering is planned. 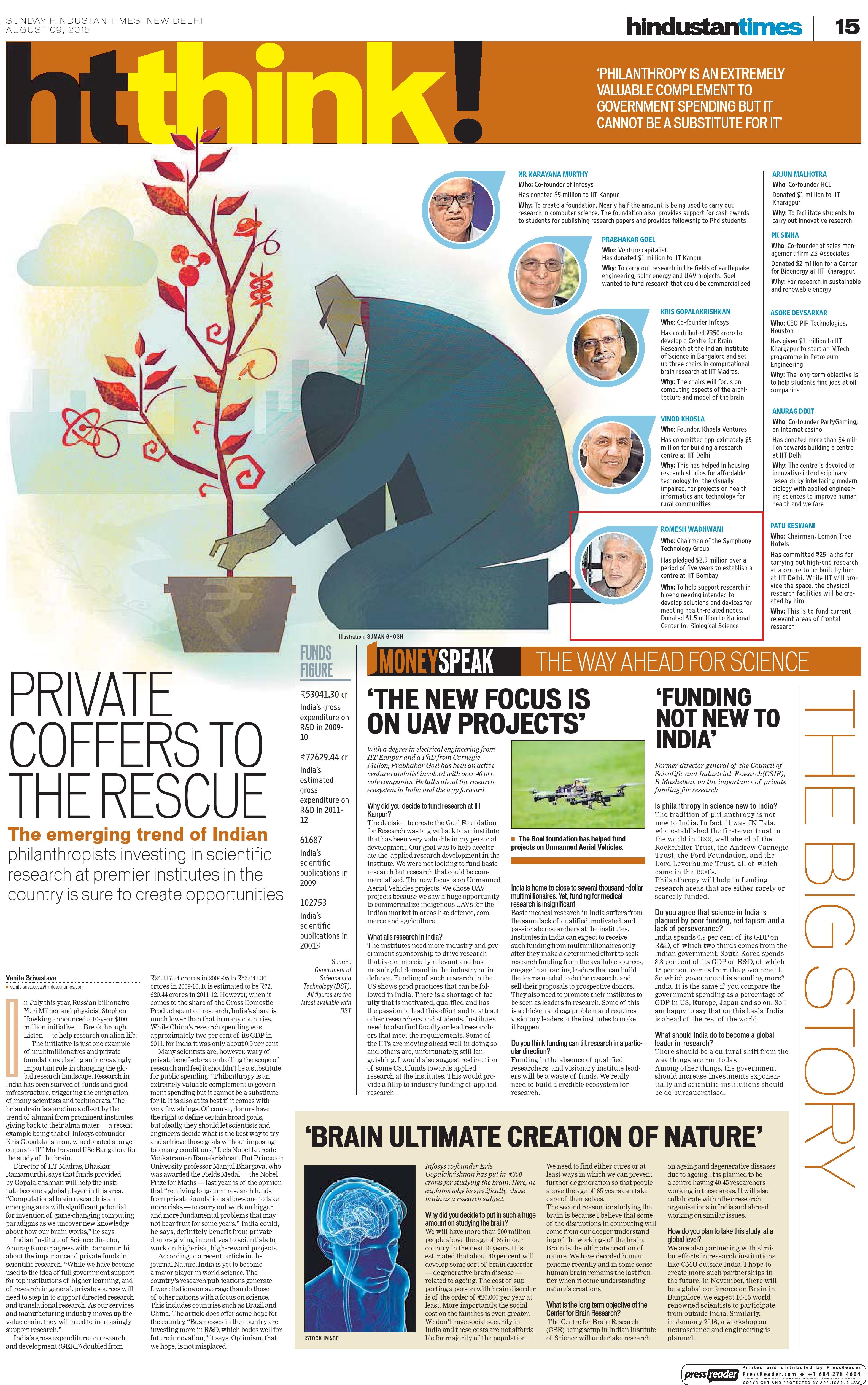