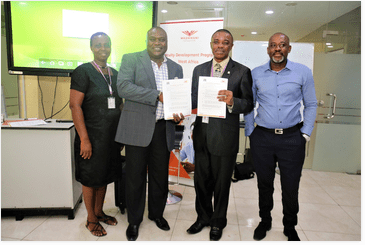 Wadhwani Foundation is a non-profitable organization with the primary mission to create jobs, enhance job creation and job fulfillment. The Foundation goes about accomplishing this mission through the deployment of different initiatives among which is the Wadhwani Entrepreneurship Colleges/National Entrepreneurship Network, according to its Managing Director, West Africa, Mr. Dare Kodaolu.

While speaking at the formal signing of a Memorandum of Understanding (MoU) between Covenant and Wadhwani on Monday, May 6, 2019, Mr. Kodaolu said that his organization was partnering with the University on the Curriculum side, to be able to introduce and teach entrepreneurship education, which has two courses. “The first one is Foundational Course, the next one is Advanced, and we expect these to run in two Semesters,” he noted.

He also stated that Wadhwani would be facilitating the teaching of Covenant faculty by subjecting them to a screening process and an assessment by a global training institute. He added that faculty members, who would be trained on how to use Wadhwani’s Knowledge Management System would in turn train their students using the Blended Learning Approach, which has videos, work simulations, quizzes, and assignments. He described it as a practical approach to teaching entrepreneurship.

“We know that these universities are fully entrenched in entrepreneurship but as a foundation, we felt we had value to add and we approached each of the universities individually and showcased what we had. We gave them our curriculum and contents to look at, and also the terms and conditions of the partnership that we proposed to have. Each of the universities here considered our proposal viable and entered into signing of MoU with us. That led to us putting together a cohort, and this is the very first one happening in Nigeria,” said Kodaolu.

In his remarks, the Deputy Vice-Chancellor, Covenant, Professor Akan Williams, representing the Vice-Chancellor, Professor AAA. Atayero, expressed appreciation to facilitators of the training programme. While encouraging Wadhwani Foundation to ensure that the MoU remain active, Professor Williams averred that for an organization to have independent MoUs and then had them centralized by bringing all of them together, showed that what it was doing was really impactful.

“For us, teaching entrepreneurship is one of our flagships. Entrepreneurial education is synonymous to the University as the institution was the flagship for the idea before it was taken to other institutions in the country by the National Universities Commission. Entrepreneurial education has been one of the core components of our curriculum in the quest to raise a new generation of leaders,” said the Deputy Vice-Chancellor