Mission skills training for India’s youth took off eight years ago. In its new avatar, it seeks to provide students with jobs

Somyasri Samal speaks English fluently – short, crisp sentences, grammar in place; she can also switch accents, we are told. Looking at this 22-year-old customer care executive with a telecom company, there is no way of guessing her back story. Samal is from Barundiha, 160km away from Bhubaneswar; overwhelming financial constraints at home once forced her to quit higher studies. Today, she holds a corporate job in Bhubaneswar and earns Rs 10,000 every month. 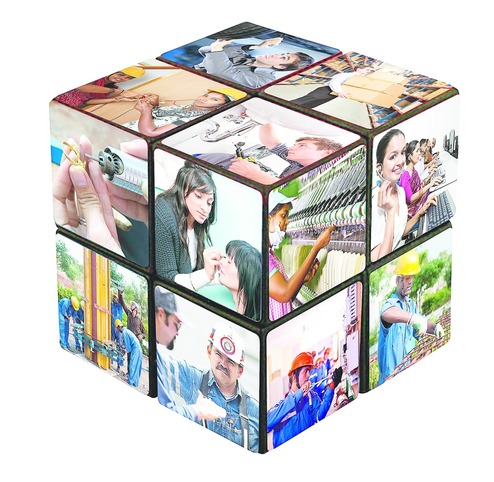 “I was the first girl to step out of our village to bag a corporate job,” she says proudly. “The training in IT and communicative English helped me get the job,” she adds. She was trained at a centre run by Anudip Foundation, a Calcutta-based organisation that trains youth in market-aligned skills.

Samal is one among the growing number of young people in the country who have joined the skilling revolution ushered in by the central government eight years ago and Anudip is one of the 267 partner organisations of the National Skill Development Corporation (NSDC) under the Union ministry of skill development and enterpreneurship. “Vocational skills training is essential, especially in rural and semi-urban India. Our mantra is to make the youth a part of India’s ‘new economy’,” says Subhra Bandyapadhyaya, GM, Anudip Foundation.

NSDC, along with its partners, has been able to train 8.03 million students under short-term skill courses. Says Rajiv Pratap Rudy, Union minister of state for skill development and enterpreneurship, “Out of this, 80 per cent has happened in the last two years.” (See Straight talk)

In its new avatar, the rejigged skilling revolution (renamed Skilling India Mission), launched last year, aims to achieve much more. The overall target is to skill 402 million workers by 2022, but the scheme now needs to connect students to real jobs – not just skill certificates.

To employ the growing youth population – by 2020 half of the 1.3 billion working age Indians will be less than 25 years old – NSDC has chosen 40 sector skill councils that range from IT/ITeS to logistics, and hospitality to beauty & wellness.

Says Jayant Krishna, CEO, NSDC, “We have also aligned ourselves to national missions like Make in India, Smart Cities and Digital India, mapping their requirements and thus helping in the economic development.”

Although the NSDC has helped train over 8 million students so far, less than half have been placed. Even the Comptroller and Auditor General (CAG) has questioned the way the corporation functioned till March 2014. Some partners focussed more on the number of trainees enrolled, rather than helping them land jobs.

Besides, most of the jobs are limited to specific sectors, such as IT/ITeS. Take the case of Raktim Addya who was forced to cut short his higher studies after his father retired. First, he set up a tea stall and then joined Jetking Infotrain Ltd, an NSDC partner, for training in computer hardware and networking. Within a year, he landed a job in Wipro and is now earning over Rs 2 lakh per year. He says, “The certificate can help you get jobs or even start a business.”

Says Siddharth Bharwani, VP, Jetking Infotrain Ltd, “Such success stories point out the gaps in our conventional higher education. A majority of fresh graduates from the country’s top colleges fail to secure placements.” According to Neela Dabir, dean, Tata Institute of Social Sciences, only 20 per cent of graduates from traditional streams are employable. The rest need to acquire additional qualification to get a job.

A big problem in this country is the huge mismatch between curricula and the skills required in the workplace. Says Atul Raja, executive VP of Wadhwani Foundation, a non-profit organisation that promotes skills training and entrepreneurship, “There is a marked disconnect between what academia is producing and what industry and society need.”

The major gaps in skills are in the auto industry, building and construction, textiles and retail. Aside from this, there is a skills shortage for jobs ranging from welders to masons and from electricians to nurses.

InSkills, an NSDC partner, has trained a number of youths in these sectors. Says Tridibesh Bandopadhyay, co-founder and CEO, “We have placed candidates in Maruti, Larsen & Toubro and even in construction companies in Saudi Arabia.”

However, he rues the fact that most companies in India don’t give any preferential treatment to workers with skills training at the entry level. According to him, this discourages the youth to get trained in skills. “Many administrators also look at skilling as a poor man’s domain,” he adds.

Agrees Krishna of NSDC, “We need to bring respect to skills. It’s time the youth, their parents and peers realise that no work is small.” And accept the fact that the youth needs skills that lead them to jobs.