This time for India, it’s Skills@Rio

For the first time, time for India, well be the new world awaiting the Indian participants the Indian contingent to the upcoming Olympics at Rio has crossed the three-figure mark. The mood is upbeat and the hope of outdoing its richest haul ever – that of six medals that India grabbed four years ago in London, is soaring.

From track and field to tennis courts and hockey, from the boxing ring to wrestling arena, shooting, archery, and badminton – the determination to increase the medal tally for a country of 1.2 billion has never seemed more realistic than this time around. 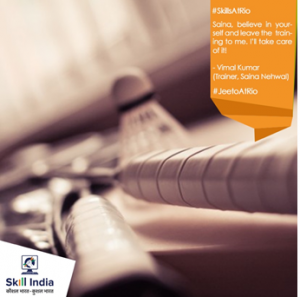 However, to fulfil the expectations of a medal-starved nation and create history at Rio, the participating contingent has to exhibit an excellent show of skills against the world- class teams. According to a study undertaken by National Skills Development Corporation (NSDC), apart from the prime skill of the sportsperson, there are multiple other skills which feed into the making of a successful sportsperson and in the long run help to fill the skill gaps the sports sector.

So, on one hand where skills of the sportsperson, like playing tactic, accuracy on the field and a quick decision can keep him on top of the game, skills imparted by the coach, physiotherapist, nutritionist, psychologist and medicine expert can be game-changers too. Take, for instance, the skills of a psychologist which help assess the current mental approaches of individuals for optimal performance or teaching the mental skill such as completion planning. Add to it the skills of a coach, who not only develops participant performance through active sports coaching but also monitors it and even analyses the needs and aspirations of the player.

It will be a combination of many such sharpened skills both in terms of quality and quantity that the Indian squad (and the overall Indian sports sector) will have to bring to fore to achieve a podium finish. Rio 2016, with Um Mundo Novo (a new world) as its motto, may well be the new world awaiting the Indian participants for whom this time it will be #SkillsAtRio